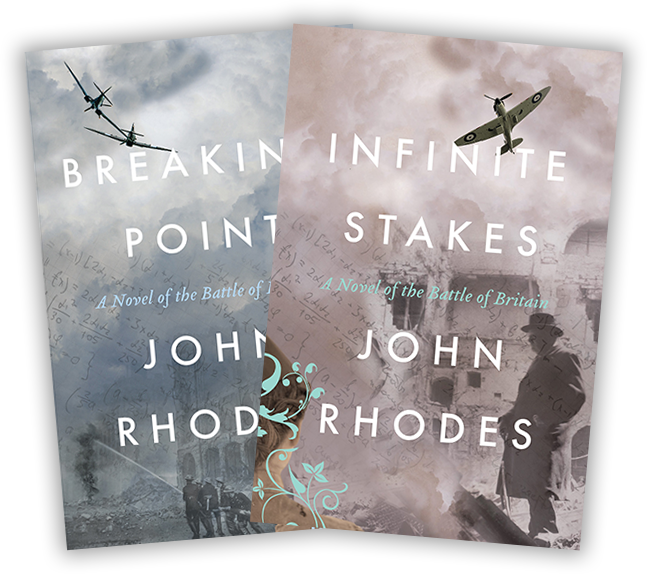 The First Two Novels in the Battle of Britain Series

And now the hour has come…

It is August, 1940. Hitler’s triumphant Third Reich has crushed all Europe—except Britain. As Hitler launches a massive aerial assault, only the heavily outnumbered Fighter Command and the iron will of Winston Churchill can stop him.

“Superb!”
—Paul Davies, Aviation Historian, Battle of Britain site
“Rhodes memorably portrays Europe’s terrifying crisis….
A gripping, emotionally bracing account of a critical moment in history.”
—Kirkus Reviews
“If you like historical fiction, or stories of women’s successes, read this book.
I highly recommend both this book and the writing of this author, John Rhodes.”
—Authors on the Air Review Crew
“…a fair degree of subtle British humor, an intelligent woman who is allowed to shine, a stoic embodiment
of Yeats’ poem about a dying airman, and an understated romance that curled my toes.”
—Jayne, Dear Author
“brilliantly written historical novel…. Readers will also be pleasantly surprised by how the author flawlessly—
even captivatingly—weaves mathematics into a war/love story. This is a WWII novel to savor.”
—Blue Ink
“A good story in its own right, the historical power and significance of this book’s backdrop
lead to a read that is fast-paced, dangerous, and addictive.”
—US Review of Books

“This is an excellent novel.… the book which is well researched and an enjoyable read.
I hope Johnnie flies again and Eleanor moves to provide more insightful analysis…”
—Professor Leslie Bell