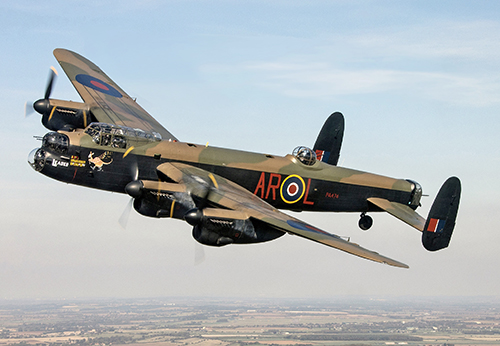 Now we come to one of the most important aircraft that fought in World War II, the Avro Lancaster heavy bomber.

When I was 5 or 6 years old we went to visit my grandparents who lived in Kirton-in-Linsey in Lincolnshire. The last part of our long journey took us along Ermine Street, an old Roman road that runs, straight as an arrow, northward from Lincoln. RAF Scampton lies directly on Ermine Street and in those days the main runway ended just by the road. I remember stopping to watch the huge black shapes of Avro Lincolns (the successors to the Lancaster) taxiing ponderously to the very end of the runway and then taking off with a deafening roar from their Merlin engines. We were less than a hundred feet away, close enough to feel the prop wash.

I remember in particular that the side windows of the cockpits were open and the pilots were in shirtsleeves with their elbows sticking out as if they were out for a Sunday drive; I remember how big they were (the cockpits were probably 15 feet off the ground—the aircraft were much, much bigger than our house;) I remember the thunder of their engines as they opened the throttles and roared off into the distance; I remember that each aircraft disappeared from view as it roared away down the runway (I guess the runway may have run a little downhill away from us) and then, after a long pause, reappeared in the distance a mile away as it climbed laboriously into the sky.

Permit me a rambling diversion, but I promise I’ll get back to Lancasters.

The Avro Lincoln was actually a Lancaster with an improved wing design and a number of other enhancements—so many that Avro decided to give in a new name. The name Avro came from the founder of the company whose name was A.V. Roe and the name A.V. Roe & Company got simplified to a-v-r-o, I don’t know when. Roe, a serial aviation entrepreneur, sold the company to a car company that needed factory space, and acquired a boatbuilding company called Saunders to form Saunders-Roe.

Roe’s career spanned the first 50 years of aviation and his contribution to aeronautical engineering, and the incredible development of aviation in general, can be summarized in his first and last aircraft: the 1908 Roe I Biplane, the first all-British aircraft to fly, and the 1952 Saunders-Roe SR 45 Princess luxury flying boat, the largest metal flying boat ever built.

The Avro Lincolns I remember probably came from 57 Squadron. RAF Scampton is most famous as the wartime home of the Dam Busters, 617 squadron. Alas for my aircraft watching days, in the 1950s the RAF decided to extend the runway to make it long enough for nuclear-carrying V Bombers. Arrow-straight Ermine Street, built by the Roman Legions, having survived 2,000 years without interference, suffered the humiliation of a massive diversionary bow to make room for the extension and the runway is no longer visible from the new road. (You can still see the path of the old road from the air—Julius Caesar built his roads to last.)

And 617 is very much around, now flying F35B Lightnings from the brand-new aircraft carrier Queen Elizabeth. I guess the technological leap from the Roe I to the SR 45 is comparable to the leap from the Lancaster to the F35. 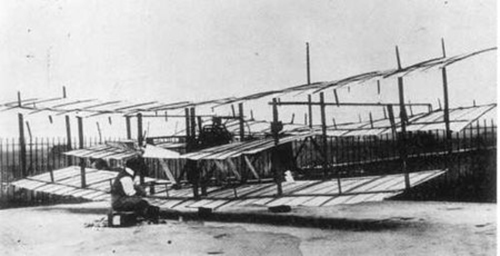 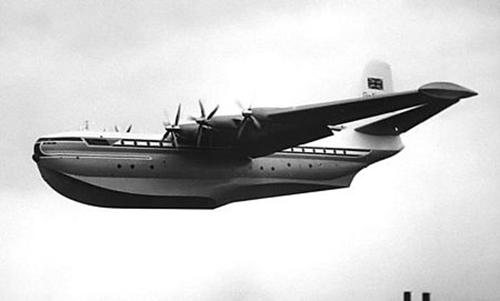 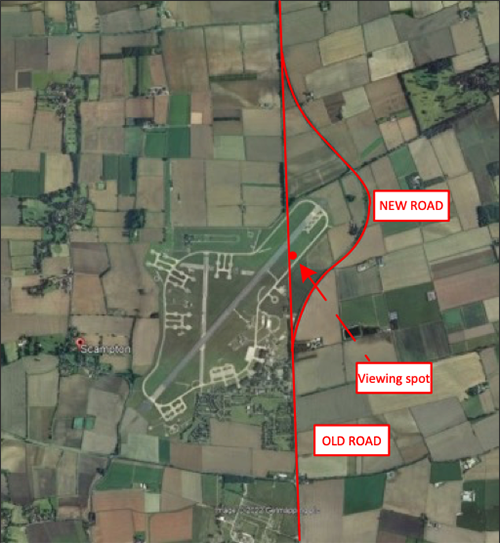 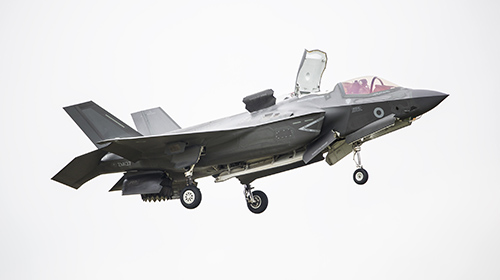 But enough of all that—I set out to write about Lancasters!

The Lancaster was one of the most successful heavy bombers of World War II. It rose, like a phoenix, from the ashes of its predecessor.

The Avro Manchester was a heavy bomber introduced in February 1941 and withdrawn in June 1942. It had an excellent airframe but was powered by two of the notorious Rolls-Royce Vulture engines. The Vulture was a 42 liter X24 engine created by combining a 21 liter V12 Peregrine engine with another inverted 21 liter V12 Peregrine (two Vs make an X.) The Vulture was prone to failure and subject to severe overheating, which was to be expected since the Peregrines from which it was derived were also prone to failure and subject to severe overheating. (The woes of the Peregrine are explored in my novel Infinite Stakes.)

The Manchester simply was not good enough. In despair, as a last-ditch effort in mid-1942, Avro tried fitting a Manchester with four powerful Merlins instead of two Vultures and, abracadabra!  a brilliantly successful heavy bomber was borne and immediately renamed as the Lancaster.

These images show that this really was one evolving aircraft, not three new ones. 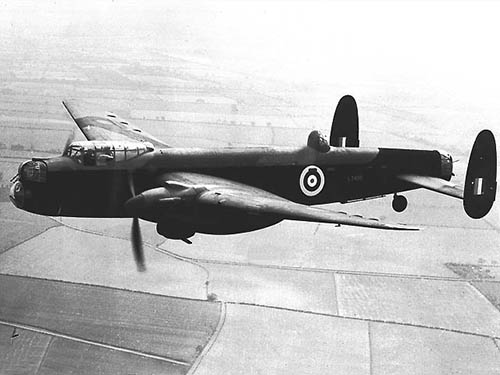 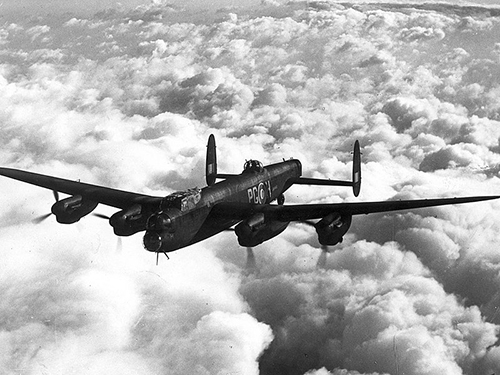 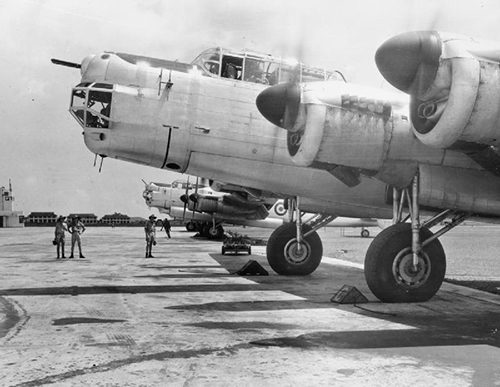 In a remarkably similar parallel story the P51 Mustang, destined to be perhaps the finest World War II fighter of all, was struggling unsuccessfully with an Allison engine. There was no point in putting the P51 into combat: it simply wasn’t fast enough above 15,000 feet. In mid-1942 a Rolls-Royce test pilot suggested trying a Merlin and, voila! a pre-eminent air superiority fighter jumped off the runway and into the sky. (I’m not sure whether abracadabra! or voila! creates more technological oomph but both transformations were in the holy moly! range.)

The USAAF and the RAF adopted different strategies for bombing German-occupied Europe. The Americans bombed by day, using very heavily armed B17s and B24s (so heavily armed, with machineguns pointing out everywhere, that the German fighter pilots called them porcupines. The RAF chose to bomb primarily under the cover of darkness, allowing them to carry fewer defensive weapons and therefore more weight in bombs. The Lancaster carried 8 light .303 machineguns in its nose, mid-upper and rear turrets, as opposed to 13 heavy 50-caliber guns firing from 10 positions in a B17.

The Lancaster had a cavernous bomb bay and could carry enormous weights. 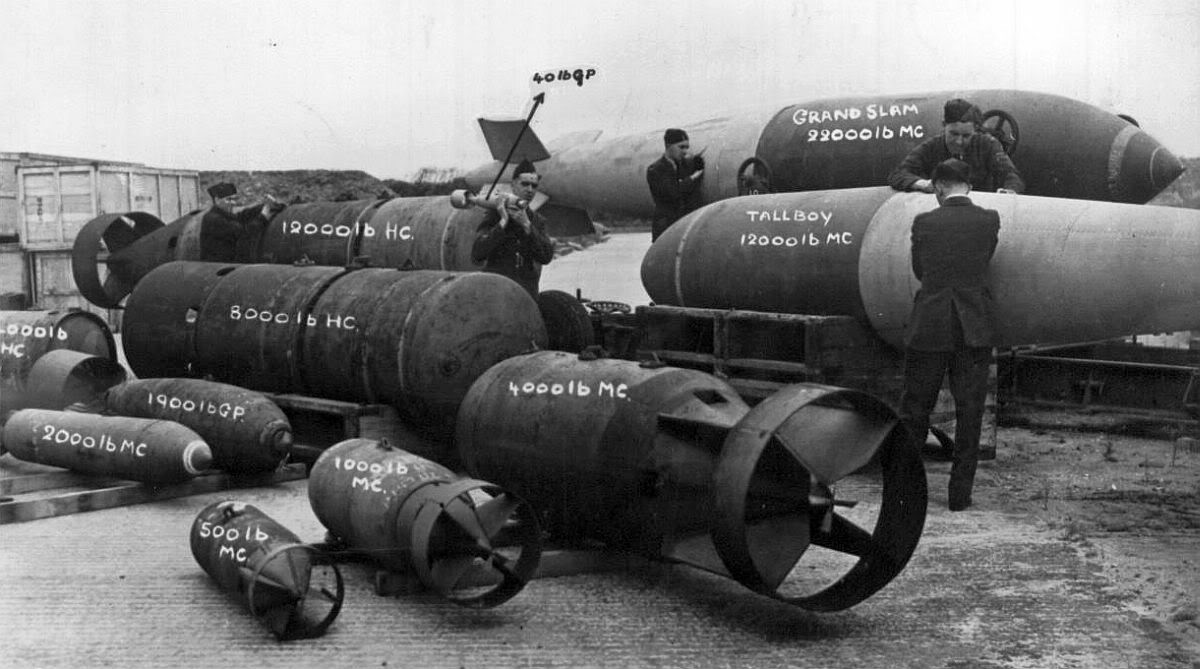 A typical bomb load could include ‘Window’—little strips of metal to blind German radar—followed by a high explosive 8000 lb. Cookie to punch through walls and ceilings and dozens of incendiaries to start fires. 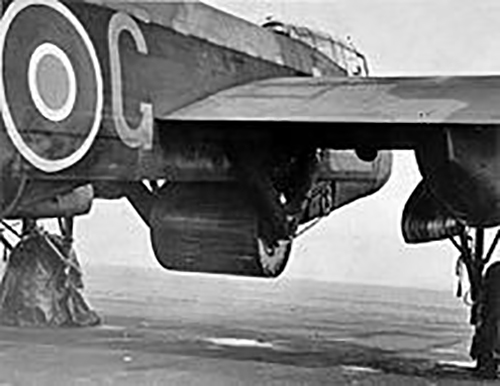 The Upkeep bouncing bomb. Note the chain mechanism which gave the bomb 500 rpm of backspin before it was released. 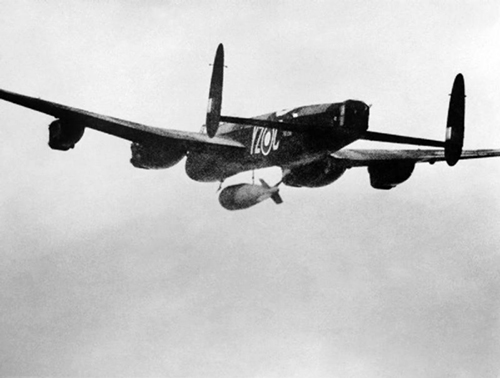 The massive Grand Slam was 22 feet long and span like a rifle bullet so that it could penetrate its target before exploding. 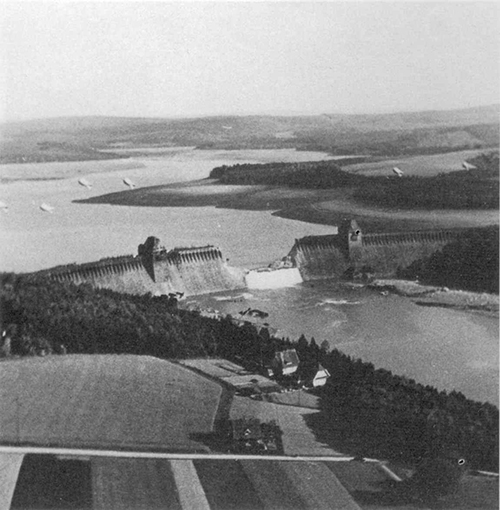 The Mohne Dam, breached by the Upkeep bomb. When the bomb hit the wall of the dam its backspin caused it to run down the wall and explode 20 feet under the water. 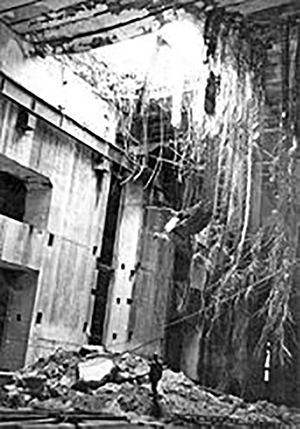 A U-Boat pen breached by a Grand Slam. The bomb drilled its way down through 11 feet of reinforced concrete before exploding among the U-Boats sheltering below.

During the late stages of the Manhattan Project it was not clear that an atomic bomb would be small enough or light enough to fit into a B29, so contingency plans were developed to use Lancasters instead (in the end the modified ‘Silver Plate’ B29s Enola Gay and Bockscar got the job done.)

Lancasters flew 156,000 missions dropping 600,000 tons of bombs. While some raids are celebrated (such as Operation Catechism that sank the German battle-cruiser Tirpitz using Tallboy bombs,) others are very controversial, in particular the fire-bombings of Hamburg and Dresden.

Over 7,000 Lancasters were built of which over 3,000 were lost in action (a 43% loss ratio.) The largest production factory was at Yeadon (now Leeds-Bradford Airport.) The assembly factory was the largest building in Europe. Its roof was disguised as fields and dummy farm animals were moved around it on a daily basis. 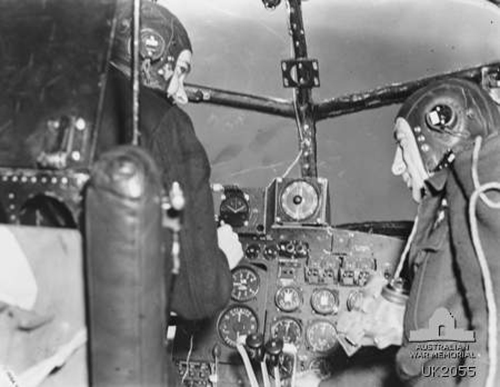 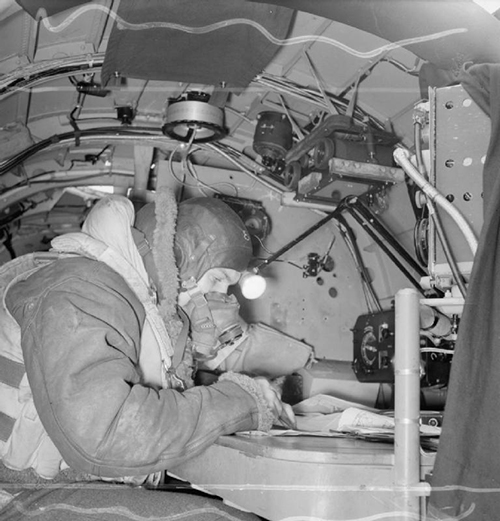 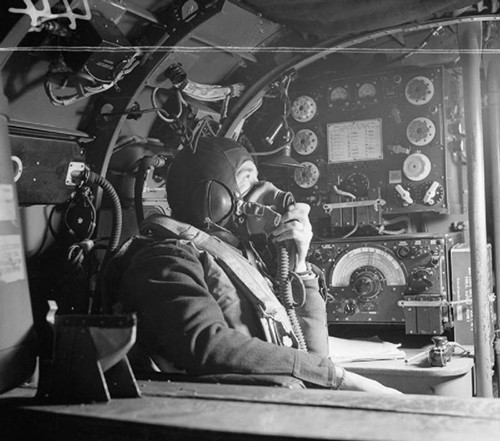 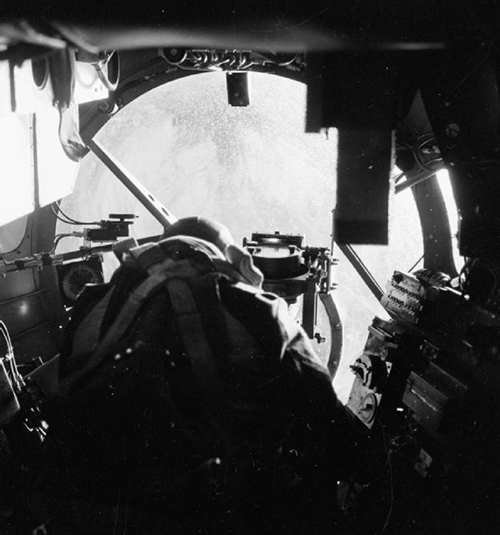 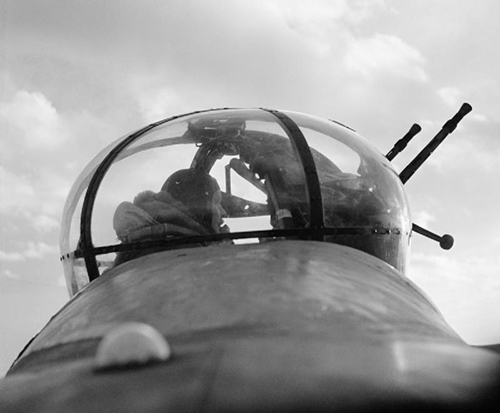 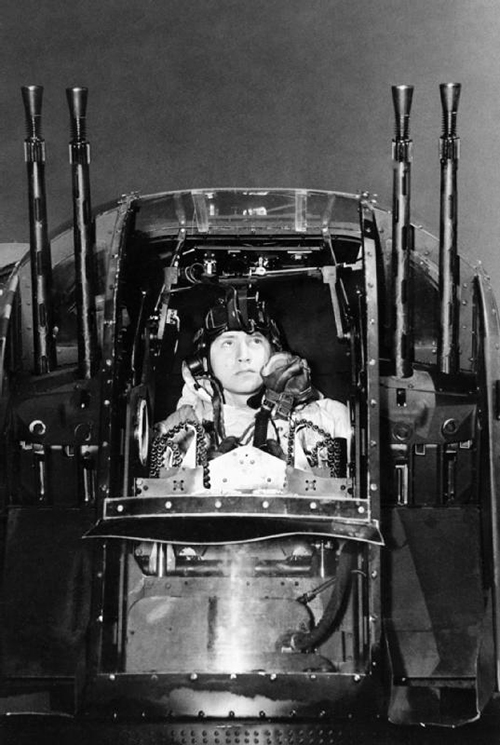 Many Lancaster air crew are buried in the Reichswald Forest War Cemetery in Germany. 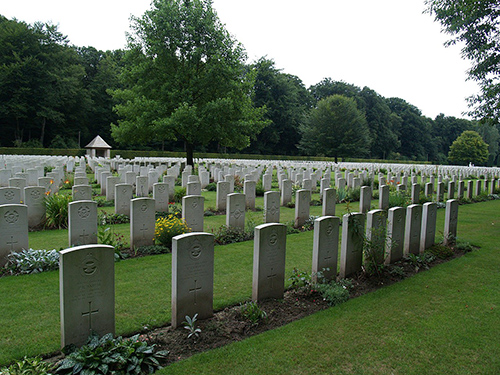 ← De Havilland Mosquito: The Wooden Wonder So This Is Christmas →