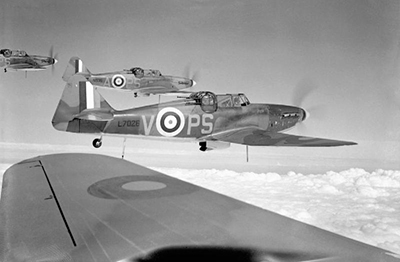 History tends to focus on winners and pass over the also-rans. Histories of military aviation in World War II tend to favor the Spitfires and the P51s, the B17s and the Lancasters, while other aircraft that, for a multitude of reasons, did not quite achieve the same iconic status tend to be forgotten—along with the men and women that built them, maintained them, flew them, and when necessary, died in them.

The men who flew Hurricanes were every bit as brave as those who flew Spitfires (and more successful.) The men that died in Fairey Battles died as nobly as those who died in Lancasters.

But aerial combat is as much about the capabilities of aircraft as it is about the skills of pilots and crew members. There is a knife edge of difference between opposing aircraft that can be the difference between life a death—the Spitfire IIs versus the Me 109 E4s in the Battle of Britain; the Fw 190 A2s and A3s versus the Spitfire Vcs over France in 1941. The battles of World War II were fought just as much on the designers’ drawing boards and in the ground crews’ dispersal areas as they were at 20,000 feet.

The balance of advantage teetered back and forth as each new and refined aircraft variant was delivered to the operational squadrons. For example, Spitfire Vs could not compete with Fw 190 A2s and A3s, and nor would the carefully planned Spitfires Mark VI, VII or VIII. Necessity is the mother of invention: the Air Ministry cobbled together the unplanned Mark IX and sent it into battle. The pendulum swung and now it was the 190’s turn to run from the superb Spitfire IX.

I put my fictional protagonist Johnnie Shaux into a Spitfire, certainly, but I also put him into other aircraft that aren’t household names: the Boulton Paul Defiant he flew in Breaking Point; the Westland Whirlwind he flew in Infinite Stakes, and the Grumman F4F Martlet he flies in A Slender Thread.

Let’s devote these next blogs to the aircraft that were not quite good enough to be dominant, but fought just as hard anyway. Let’s start with the Bolton Paul Defiant.

The Boulton Paul Defiant can best be envisioned as a Hurricane-lookalike with a rotating gun turret rather than guns in its wings. It was conceived in the mid-1930s as an excellent way of attacking enemy bombers from below and from the quarters. The Defiant’s general size and shape were similar to a Hurricane and they shared the same Merlin engines. However, the weight of the turret and a second crew member made the Defiant noticeably slower and far less maneuverable. Over a thousand Defiants were built.

The Defiant turret had four .303 machine guns in comparison to eight in Spitfire and Hurricane wings, and a combination of cannons and machine guns in Messerschmitt 109s. Defiants therefore had a reasonable firepower against bombers but was significantly outgunned by single seater fighters. The turret was the most advanced at the time. It was based on a French design and was powered by hydraulics (many other contemporary turrets were hand operated.) 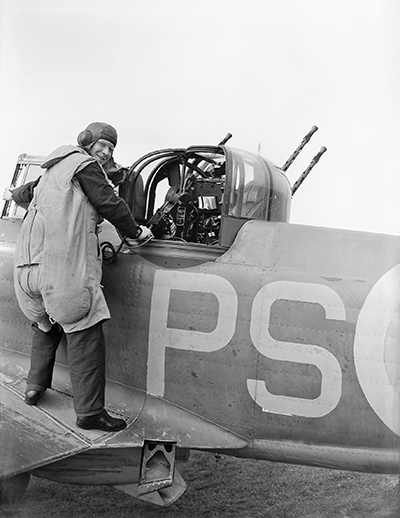 Like all aircraft turrets in World War II the Defiant turret was extremely cramped and very hard to get in and out of. The turret would be pointed sideways on the ground. The back of the turret could be opened and the gunner entered by climbing in from the wing. There was no room for the gunner to sit on his parachute and he wore a bulbous ‘rhino’ suit that contained a parachute and a flotation device. The guns were located on the extreme sides of the turret so that the he was sitting between the stocks.

These turrets found a life of their own apart from Defiants. They were used successfully as antiaircraft guns on small naval ships and armed merchantmen.

When Hitler attacked Western Europe in 1940 Defiants were effective against Luftwaffe bombers, particularly Dornier 17s and Junkers 87 Stukas, attacking the bombers from the side or from below. They were also somewhat effective against Messerschmitt 110 heavy fighters. Unfortunately the Defiants were highly vulnerable to Messerschmitt 109s. They could surprise 109s that mistook them for Hurricanes and attacked from the rear, but as soon as the Luftwaffe realized they could only shoot upwards Defiants began to be shot down in great numbers. For example, on July 17th seven out of nine Defiants from 141 Squadron were shot down while defending a convoy in the Channel. 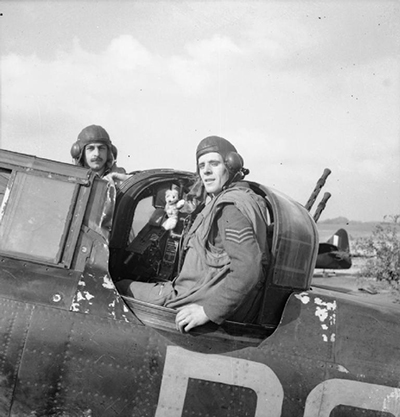 Defiants continued to fight in the Battle of Britain although literally outgunned. On August 26th a Defiant crew, pilot Flight Sergeant Thorn and air gunner Flight Sergeant Barker of 264 Squadron, shot down two Dornier 17s over Kent. They were attacked and set on fire by a Me 109 but managed to shoot it down also. 264 lost three Defiants that day and five more two days later. It was clear that Defiants could not survive in daylight but continued to fight by night.

Defiants began night operations against Luftwaffe bombing attacks during the ‘blitz.’ Initially interceptions were largely a matter of luck because the Defiants had no radars. However, with the introduction of the Mk IV Airborne Interception radar Defiants became the most effective night fighters in the early months of the blitz.

‘Mandrel’ was a method of blinding German Freya radars with electronic noise creating gaps in the radar screen through which bomber formations could fly undetected.

In my novel Breaking Point my protagonist Johnnie Shaux is flying a Defiant when Hitler launches his blitzkrieg attack on Western Europe in 1940. He finds he can succeed against Stuka bombers by attacking from the beam but is hopelessly outmatched against Me 109s. He is shot down by 109s over Dunkirk. In real history fourteen Defiants were lost over Dunkirk in eight days.

At the end of Breaking Point he flies a Defiant to defend his airfield from attack by Me 110s, with my protagonist Eleanor in the turret. He uses a Schräge Musik upward firing technique to attack the 110s, just as Defiant night fighter pilots did during the blitz. Some readers have questioned my putting Eleanor in a Defiant, for which there is definitely no real historical precedent, but there is no physical reason a woman could not have been an air gunner and she was the only person there who could operate the turret. I wanted to give a worn-out and obsolescent Defiant a moment of success, a dogged fighter till the end.

Besides, writers of fiction are allowed some latitude!