“A great novel of the Battle of Britain—from many angles.

Breaking Point is a novel about the Battle of Britain 1940 fought in the sky and on the ground. Both are stories told from many different perspectives using realistic characters of a fighter pilot, a WAAF intelligence Officer, senior officials, Churchill, and many connected with the Fighter Command defence system of command and control during that hard fought year.

Breaking Point is an apt title; the battle came close to succeeding during the last 2 weeks of August and the first week of September 1940, when air superiority was almost lost to the Luftwaffe. This was their task, to weaken the RAF fighter strength, to gain air superiority needed for an air and sea invasion of Britain by late September or early October. All of this is covered by the action in the air of the Spitfire and Hurricane pilots as well as from the ground, showing how close things became.

John Rhodes has succeeded in capturing the mood of the period and also educated readers into the little told story of the people who supported the heroic Few, fighting and dying to save Britain.”
—Paul Davies, Aviation Historian, Battle of Britain Site Administrator

“WWII rages in August, 1940, and in England, the badly diminished British RAF is outnumbered. This story is told from the alternating views of two school chums: Eleanor Rand, mathematician and WAAF staff officer in RAF headquarters, and Johnnie Shaux, a Spitfire fighter pilot who knows his life has exceeded the average expectancy for a pilot, five hours of operational flying time. This novel tells how the mathematics ‘game theory’ and pilots’ sheer determination battle Nazi forces during the Battle of Britain. The Third Reich had conquered all of Europe except Britain.

This book is like Once An Eagle meets Hidden Figures. Hang onto your hat for a thrilling ride filled with feats of daring young pilots and the extraordinary accomplishment of women when their success was not supported. It’s a fascinating retelling. It amazes me that World History is not be taught using such sources; I would not have tuned out my teacher. If you like historical fiction, or stories of women’s successes, read this book. I highly recommend both this book and the writing of this author, John Rhodes.”
—Authors on the Air Review Crew

“Rhodes’ action scenes are hair-raising if one submits to the power of their execution and allows imagination to take the stick. I myself hate heights, so I found each chapter involving a patrol difficult and visceral. There was plenty of pain and heartbreak and I felt those keenly. It was difficult not to feel pride, too, in what these men and women were able to do. Rhodes clearly did and does.”
—Jim Eaton, Bestsellersworld.com

“Rhodes was born in England during World War II, and his father served with RAF Fighter Command. He released an early draft last year, titled “Among the Clouds Above.” (That title was an allusion to William Butler Year’s poem, “An Irish Airman Foresees His Death.”) Now, he unveils a revised and retitled version, available to a wider audience.

If anything, Breaking Point offers a lesson to apprentice authors: An extra draft or two will almost certainly improve whatever you write. Although Rhodes is a novice, his “Breaking Point” is brisk and well-sketched and can stand comparison to the World War II tales of Len Deighton or Douglas Reeman.

Rhodes provides plenty of action, peppered with the clipped jargon of the aviators and their ground crews: “Tally ho!” “Piece of cake.′ A rather lengthy appendix provides a capsule history of the Battle of Britain, spoon-feeding a painless lesson to readers.”
—Ben Steelman, StarNews Online (Read full review)

“I’ve been trying to find books about World War II with some degree of romance in them and thus when I saw the blurb for Breaking Point I thought, here we go, this sounds interesting. I had no idea what a treat I was going to get with it. Yes, there are grim moments—it is the Battle of Britain after all and filled with young and inexperienced pilots, many of whom never had a chance due to the hurry with which the RAF hurled them into planes and into the air against the overwhelming air superiority of the Lufwaffe. But there is also a a fair degree of subtle British humor, an intelligent woman who is allowed to shine, a stoic embodiment of Yeats’ poem about a dying airman, and an understated romance that curled my toes.

The Battle of Britain comes alive and I found myself riveted to the air battles 339 Squadron engages in. The descriptions of the various planes, the way they flew, and the tactics each side used were perfectly clear. As Eleanor was telling another character why Hitler needed Kesselring to destroy the RAF before an invasion could begin, then later explained why the RAF only needed to not lose the battle in order to defeat the Luftwaffe, it all made sense. I also appreciated that the RAF pilots were allowed to feel responsibility for the death of their German opponents personally and that Shaux was there to help one newbie with the impact of his actions.

I had a great time reading Breaking Point and look forward to the sequel. B+”
—Jayne, Dear Author (Read full review)

“Having read about this period in the war and admiring pilots such as Geoffrey Wellum. I was keen to read this. Well researched and based on six days during the famous Battle of Britain where the airmen’s life expectancy was actually something in the region of 4 weeks. At that time Europe was crushed by the Nazis and it could have been our turn next but the Battle of Britain played such a pivotal role in this. But as the novel shows this was not just about the airmen themselves women—working in the ops and maps rooms knowing what was happening but struggling to be recognised in their roles. We have Johnnie the pilot and Eleanor in this story and the book alternates around these two main characters. The author portrays this time well and those who have studied this time know, Britain was at the brink and history could have taken a very different turn. Whether the reader is familiar with this period in history or not it makes a good read and highly recommended for those interested in this part of history. The author’s notes were fascinating and the reader can learn so much, I look forward to reading more from John Rhodes.”
—LoveReading

“John Rhodes’ brilliantly written historical novel centers on a Spitfire pilot and a mathematical genius struggling through WWII’s Battle of Britain and their own lack of personal confidence.This engaging history laced with personal struggle is spiced with well-researched and thrilling aerial combat scenes… Despite the action, the story never sacrifices character development and an appreciation of the humanness of those who serve as minor pieces in the chess game played by the masters of war. Readers will also be pleasantly surprised by how the author flawlessly—even captivatingly—weaves mathematics into a war/love story. This is a WWII novel to savor.”
—Blue Ink Review

“Based on the historical accuracy of the Battle of Britain but with fictional elements, the narrative’s focus alternates between the two protagonists, Shaux and Eleanor. Prominent figures factor in primarily to Eleanor’s story, and the details of the fighting are true to records. The use of the two fictional leads allows for a strong balance of militaristic action and workplace tension and drama. Those who are new to learning about the air combat of the Second World War can consult the appendices at the end of the book, which offer detailed information about the various planes, figures, and speeches that so prominently define this era of history. A good story in its own right, the historical power and significance of this book’s backdrop lead to a read that is fast-paced, dangerous, and addictive.”
—US Review of Books

“Breaking Point by John Rhodes is a story of the Battle of Britain during World War II. Most of the characters are fictionalized as are most of the air battles. However, many of the military and air battles are true to life.

I was hesitant at first as I started Breaking Point as this is not my favorite genre. By the second page, I knew this was going to be a good book. I was right. I was alive during this period of time and remember listening to Walter Winchell report over his radio news program about the Battle of Britain.

Rhodes weaves the story around actual air battles and the people involved—both fictional and real life. This engrossing book takes us into the airmen’s lives on the ground. It reveals how their dogged determination helped to win the war and the emotional price they paid to climb into their planes to do what they knew had to be done.

This period was a very trying time for Britain and the Breaking Point brings to life what was given to save a nation.”
—Bookloons

“This is an excellent novel that focuses largely on the significant weeks of the Battle of Britain. The accounts of the battle and the descriptions of what it must have been like to fly planes in that battle, are accurate and authentic. The main pilot character is a realistic mixture of self-doubt, fatalism and determination but what makes this book different from other similar novels is the intriguing use of game theory by the main female character, Eleanor as a way of analyzing what is going on in the air. The juxtapositioning of the statistical and theoretical analysis of the battle personified by Eleanor and the reality of the fighting experienced by Johnnie and his colleagues provide an extra dimension to the book which is well researched and an enjoyable read. I hope Johnnie flies again and Eleanor moves to provide more insightful analysis—perhaps helping to support D Day!”
—Professor Les Bell 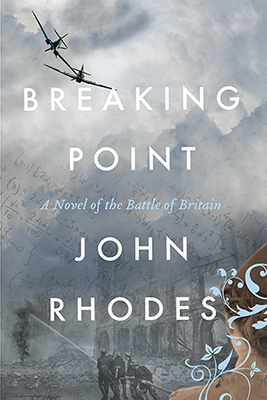