“John Rhodes has created a sequel that stands up well to following a brilliant first novel of the Battle of Britain. This one continues the story of the fighter pilots who save Britain in 1940, told from the perspective of a pilot in the air as well as the WAAF and people behind the scenes, from Churchill to underground operations rooms and Intelligence.

The book is wonderful, evocative-recreating the atmosphere of 1940. It is compelling reading.”
—Paul Davies, Aviation Historian, Battle of Britain Site Administrator

“Upon starting the book I was a bit surprised by the back and forth between not only character POV but also by the modern day interview versus WWII action and was not sure I liked it but I have to say I quickly became absorbed in the story and enjoyed it tremendously! Although Eleanor and Johnnie are both fictional characters, as is Eleanor’s mathematical model and department, the author masterfully weaves their story into the real life Battle of Britain, its aftermath and actual historical figures they interact with including Churchill, Harry Hopkins and others. After finishing Infinite Stakes I discovered there is a preceding book, Breaking Point, which introduces us to Eleanor and Johnnie and enjoyed it as well. I hope for another book about these two interesting characters.”
—NetGalley

“What an absolutely brilliant story this is. It was a stroke of pure genius that caused Mr. Rhodes to come up with an extraordinarily gifted female mathematician around whom to base the story. The story of the pilots and Charlie the mascot—was richly detailed that I enjoyed enormously. I was quite delighted with the unexpectedly subdued happy ending especially given how few happy endings occurred in the aftermath of World War II. As much as I enjoyed the story, I found the author’s notes which were interesting on their own and well stated bearing the author’s imprimatur. Great touch, Mr. Rhodes—your fellow authors could take a page from your writing handbook. I liked the interview format as a most interesting way to present the story.

I was disappointed that there really was not an Eleanor Rand in truth. I enjoyed the character’s spunk, strength and seemingly infinite patience. This is definitely a book to pass on to a friend in need of a break from a snowy winter. Great read.”
—2021 Benjamin Franklin Awards – Judge’s Evaluation

“It’s a ripping yarn and, as in Breaking Point, Rhodes tells it from the point of view of two characters…. The conceit works, giving well-paced action while feeding the reader a painless, easy-to-digest history lesson. There’s even a wartime love story… With considerable comedy amid the pathos, Infinite Stakes will find an audience with history buffs, fans of militaria and flying enthusiasts.”
—Ben Steelman, Star News

“Compelling and meticulously researched. Many books have been written about the early years of World War 2, when only the Royal Air Force stood between Britain and a German invasion. John Rhodes new novel Infinite Stakes has earned a place at the top of the pile for its compelling story and meticulous historical accuracy.

The core structure of the book is unusual. Eleanor Rand, mathematician, retired RAF officer and tactician, reflects on the events of 1940-1941 in a present day interview. Her astute recollections of the rolling events of the conflict are interspersed with vivid “living” accounts set in her days as an adviser to Churchill and senior RAF officers, and on “her” Johnny, ace pilot Johnny Shaux, leading his squadron of Spitfires against the Luftwaffe bombers and fighters.

John Rhodes gives an intriguing and compelling twist to the story by creating in Eleanor as a strong woman competing in a man’s world to use her mathematical knowledge to predict what the Luftwaffe would do, rather than merely reacting to events. Controversially, to concentrate on ‘not losing the battle’, rather than trying to win it. Counterbalanced to this narrative, the author takes the reader high over the fields of southern England in Johnny’s cockpit. The resulting action sequences are written vividly and paint a riveting picture. You fly with them. You die with some.

Both Eleanor and Johnny are well depicted, with real fears, hopes and setbacks. Their realism adds greatly to the impact and credibility of the text . Actual historical figures are depicted honestly and react to Eleanor’s challenging suggestions in a way that is faithful to their real-life characters.

The story doesn’t end there. John Rhodes develops his characters by exploring the escalation of the war, the high level and tortuous meetings with future allies, and America’s eventual entry into the conflict. It is a clear account of actual events without becoming a historical treatise rather than a novel.

The elements that lift Infinite Stakes above its counterparts are the painstaking historical research that underpins every aspect of the book, the format of a modern day commentary set against vivid accounts of “live” action, and the subtle weaving of a United States thread into all parts of the story, right up to the dramatic and terrible events at Pearl Harbor.

A warning to a British reader. The text is published in the United States and uses “American” spelling. You’ll soon get used to it, because you will want to know what happens next!”
—CDMR: Lillington History Society 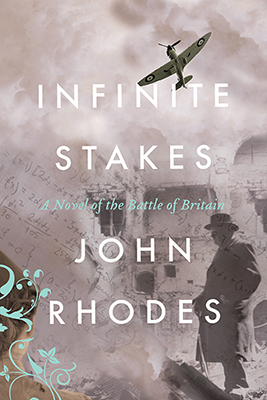