“In 1942, Malta has been reduced to a ‘land of privation of suffering’ but remains a strategically crucial territory despite its small size. Eleanor Shaux, stationed in Malta with the Women’s Auxiliary Air Force, captures the significance of the island succinctly in dialogue: ‘If we lose Malta, we lose the Med. If we lose the Med, we lose the Suez Canal and our access to the Red Sea and the Indian Ocean. If we lose that, we lose the war.’ To make matters worse, a massive confrontation looms with Gen. Erwin Rommel, the most skilled tactician in the German military, who has Malta in his sights. Eleanor’s husband, Johnnie Shaux, is in the Royal Air Force, and he’s known as a ‘fighter pilot’s fighter pilot’ who braves danger repeatedly and believes his death will come in the ‘blinding glare of the killing fields.’ The situation challenges the couple’s marriage, and Eleanor wonders if she’s complicit in Johnnie’s near-certain fate—that she’s ‘sacrificed her husband to the gods of war.’ Rhodes’ knowledge of the historical circumstances of this tale, which crescendo with the siege of Malta, is magisterial—rigorous and granular but also with an impressive sense of context. He also sensitively captures the psyche of the fighter pilot, who must strenuously maintain vigilance and composure. The prose strains unsuccessfully for poetic profundity at times, as in this description of the military office’s disheveled design: ‘It was easy to get lost, and Eleanor sometimes wondered if the mythical Minotaur—half man, half bull—would suddenly spring, snarling, from around some stygian corner.’ However, these moments don’t undermine the novel’s overall power, which largely lies in its historical astuteness.”
—Kirkus Reviews

“The story of Malta during World War II is often overlooked in retellings of the war, but its persistence was a vital part of the Allies’ success. A British-owned island off the coast of Italy, Malta was sought after by both sides as the key to victory in southern Europe.

This novel follows Johnnie and Eleanor Shaux, a couple who have thus far avoided being torn apart by the war. Their love, however, will be tested alongside Malta’s resolve as Italian and German forces batter the island, blockading it at sea and bombarding it from the sky. Both the war and the young couple’s future will hang by a slender thread.

Rhodes has clearly done his research, and at times it shows just a little too much. While I learned a great deal about the military minutiae of the war, hearing about the specific sorts of planes took away from the action. On the whole, though, it was a beautiful book. I loved how Rhodes delved into the inner thoughts and lives of his characters, and at the risk of spoiling the ending, I found it the perfect mixture of heartbreak and hope.”
—Jo Niederhoff, Seattle Book Review

“The saga continues. Johnny and Eleanor find themselves in Malta at the point when the Axis bombing of the island is at its most severe. Johnny must not only continue to face the horrors of the war in the air but now had to contend with war at sea. The strains of battle and the death of friends and foe are beginning to penetrate the carapace of fatalism with which Johnny surrounds himself. Similarly, Eleanor must confront the consequences of decisions made and not yet made as she struggles to cope with the impact of the bombing of Malta.

This gripping third episode in the Eleanor and Johnny Shaux series is based on excellent research which gives it a powerful element of realism. It is well written, packed with action and unexpected twists and turns. In short, it is a very good read, as we have come to expect from John Rhodes. I look forward to the next episode.”
—Professor Les Bell

“A Slender Thread tells the story of the besieged Mediterranean island of Malta during a crucial point of World War 2. The author’s skill lies in his ability to insert his fictional characters into a detailed and well researched historical narrative. The momentous background story becomes the natural setting for the events the author describes and how his characters respond. The combination is compelling and credible.

Eleanor and Johnny, his main characters, live their lives against vividly told episodes of conflict. The futility of war, as well as accounts of extreme bravery, are described without judgment. Both Eleanor and Johnny are profoundly affected by what they see and do, and are forced into making life changing decisions. It is a measure of the author’s skill that you care about what happens next.

A Slender Thread is the third book in the series but reads very well as a ‘stand-alone’ purchase. John Rhodes writes in a fluent style which bring his characters and the island’s story into vivid life. Very highly recommended.”
—Lillington History Society

“Rhodes knows his territory. His father served with RAF Fighter Command in the war; as a boy, he played in streets of London that were still bomb-blasted. After earning a master’s degree in history from Cambridge, he embarked on a banking career, moving to Wilmington on his retirement.

His depictions of aerial combat can stand comparison to Ken Follett’s RAF novels. In particular, A Slender Thread pays tribute to the RAF ground crews, technical geniuses who kept patching together planes amid a perpetual shortage of parts.

A Slender Thread ends with a number of unresolved threads. For one, the Yanks want Eleanor to come work on something called the Manhattan Project. It’s comforting to know that several more installments of this fascinating series are in order.”
—Star News Online 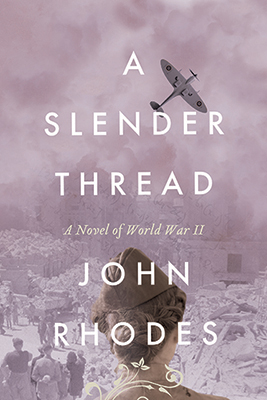 Return to A Slender Thread