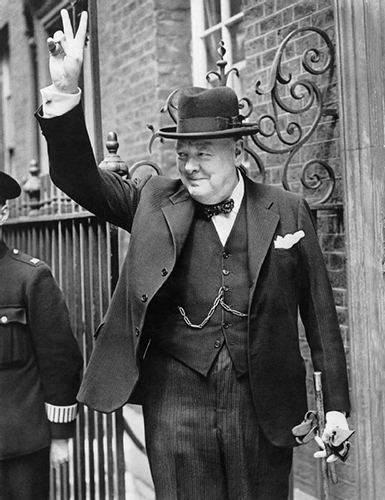 On August 18th Winston Churchill rose in the House of Commons to deliver one of his greatest speeches—indeed, one can argue it was one of the greatest speeches delivered in the English language.  The speech included the famous line: “Never in the field of human conflict was so much owed by so many to so few …”

As the Battle of Britain raged in the skies over southern England—this was five days after Eagle Day, when the Luftwaffe launched its aerial assault—Churchill described the battle and the bravery of the RAF fighter pilots who he dubbed ‘the few.’

It is important to remember that the odds were heavily against the RAF and Churchill—and the world—had no idea that 11 Group would pull off one of the greatest victories in military history. The RAF was outnumbered by the Luftwaffe by 3:1. The Luftwaffe was sending up to 1,500 aircraft a day, while Fighter Command’s 11 Group, responsible for defending southeastern England, was seldom able to put more than 200 Hurricanes and Spitfires in the air. 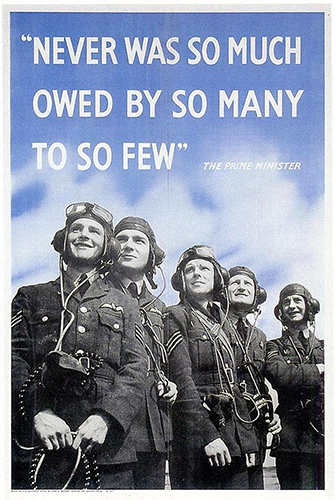 My novel Breaking Point includes August 18th. That evening my protagonist, Spitfire pilot Johnnie Shaux, is having a beer in the local village inn when Churchill’s speech is broadcast…

The bar drew silent as Mrs. Winslow turned up the radio and an announcer intoned an introduction to the prime minister.

Shaux listened to the gravelly voice with rapt attention. The long, flowing sentences rolled out with irresistible power. It was like listening to poetry:

“Rather more than a quarter of a year has passed since the new Government came into power in this country. What a cataract of disaster has poured out upon us since then!”

“Yes it has, you stupid old man,” Debenham growled.

“Shut up!” Dottie growled back.

“The great air battle which has been in progress over this Island for the last few weeks has recently attained a high intensity. It is too soon to attempt to assign limits either to its scale or to its duration. We must certainly expect that greater efforts will be made by the enemy than any he has so far put forth …”

If that was the case, Shaux thought, he wondered how much longer he could go on … waking up every morning and trying to compose himself … flying all day every day, encountering the enemy for a few seconds of vicious, kill-or-be-killed action … counting the dead but not remembering them … pretending that the enemy aircraft were not flown by young men just like himself … waiting for the day he’d fly once too often …

Churchill’s voice rolled on. “We may be sure, therefore, that he will continue as long as he has the strength to do so …”

As, I suppose, will I, Shaux thought, until I reach a pointless end to a pointless life. After all, I don’t really have anything better to do.

“We believe that we shall be able to continue the air struggle indefinitely and as long as the enemy pleases, and the longer it continues the more rapid will be our approach, first towards that parity, and then into that superiority, in the air upon which in a large measure the decision of the war depends …”

How could he be so sure, so confident that this battle would not end in defeat, one more disaster in the cataract? Didn’t Churchill understand how hard it was to fight just one more day, let alone “indefinitely”? Didn’t Churchill understand that eighteen-year-old Froggie Potter would almost certainly come to a horrible fate while Churchill continued his indefinite struggle? Parity? Superiority? On what basis—that Churchill was prepared to sacrifice more Froggie Potters than Hitler was?

“The gratitude of every home in our Island, in our Empire, and indeed throughout the world, except in the abodes of the guilty, goes out to the British airmen who, undaunted by odds, unwearied in their constant challenge and mortal danger, are turning the tide of the World War by their prowess and by their devotion …”

Shaux shivered. It seemed that Churchill was speaking directly and solely to him, stiffening his sinews and summoning up his blood. Undaunted by odds, unwearied in their constant challenge and mortal danger … But Shaux was daunted; he was weary!

Yes, he thought Churchill might have answered, but you also have prowess and devotion, for you climb unhesitatingly into your Spitfire every time you’re called upon to do so.

Yes, that’s true, Shaux might have answered, but only because …

Surely not—he was no hero, just a man indifferent to his fate; there was nothing heroic about risking a valueless life. Besides, the pilot in Yeats’s poem had not fought because of duty or because of the inspirational speeches of politicians, and nor did Shaux, who fought because he just happened to be in the RAF, and in the RAF you fly.

“All hearts go out to the fighter pilots, whose brilliant actions we see with our own eyes day after day …”

Shaux looked down at the table, sensing Dottie Brown’s burning eyes on him. He knew the locals in the bar were staring at the pilots, and he felt as if half the world were staring at him too. Shaux felt ashamed; he didn’t want the burden of other people’s gratitude. He didn’t want them to think he was being selfless. He didn’t want people to think that his actions were brilliant. Giving up a life not worth living—a waste of breath—was not a sacrifice deserving credit.

He stole a glance at the other pilots, their boisterous drinking set aside while Churchill spoke. Digby was looking sheepish; Potter was rapt; Ash was puffed up with pride, even though he’d been in the battle less than a day.

The battle would rage on for several weeks more. I shall blog again soon.

← Never in the Field of Human Conflict … The Blitz Begins →