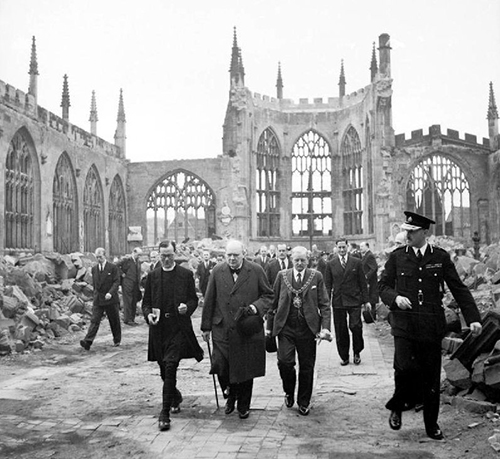 November 14th/15th, 1940, is remembered as the night that the Luftwaffe bombed Coventry. Although there were many more destructive attacks over the course of the war, this raid on Coventry stands out (as the 1945 raid on Dresden does) in popular memory as an example of ‘total war’ in which civilian populations are on the front lines and there is no practical difference between military and civilian targets.

Coventry was (and is) an important industrial city and in 1940 its factories producing military weapons and supplies were considered legitimate military targets. Any damage to surrounding civilian areas was considered unfortunate but inevitable. The medieval center of Coventry was destroyed, including the cathedral, the skeleton of which still stands as a memorial. Almost 600 civilians were killed and numerous factories were damaged or destroyed. The Luftwaffe sent 500 aircraft of which only one was shot down.

The raid is notable its technical innovations:

As shocking as this raid was at the time, it pales into insignificance in comparison to later raids carried out by the Allies. In Europe the US 8th Army Airforce under General James Doolittle sent hundreds of B17 heavy bombers to attack German cities by day and RAF Bomber Command under Air Chief Marshall ‘Bomber’ Harris sent hundreds of Lancaster bombers (each carrying up to 10 tons of bombs) by night. During the latter stages of the war B29s of the US 12th Army Airforce conducted massive raids against Japanese cities resulting in devastating losses of civilian lives.

It is interesting to note the difference in scale between Operation ‘Moonlight Sonata’, the Luftwaffe raid on Coventry, and Operation Gomorrah, a week of raids by B17s and Lancasters on Hamburg in 1943.

The role and value of strategic bombing were hotly debated during the war as they have been ever since. Proponents argued strenuously that it was necessary to destroy the enemy’s ability to fight by destroying the enemy’s economy, including the civilian workforce. It was also argued that massive bombing would destroy the enemy’s morale.

Strategic bombing also enabled Churchill to tell Stalin he had opened up a ‘second front’ in 1942 and 1943 by bombing Germany, even though the Allies could not invade northern Europe until D-Say 1944. This was important in maintaining a good relationship with Stalin, who was furious that D-Day did not take place in 1943 as he had originally been promised. After the war it became clear that most of Germany’s fighters and heavy artillery (with all their necessary supporting infrastructure and resources) were held back in Germany to defend against bombers rather than being available to be used against Russia on the Eastern Front.

At the time, therefore, large scale intensive strategic bombing was generally regarded as a necessary evil. In the years following the war sentiment swung against such bombing, regarding it as a murderous escalating cycle of ‘tit-for-tat’ vengeance. Post-war anti-bombing sentiment was strengthened by widespread opposition to the use of nuclear weapons and what many regarded as excessive bombing by the US in the Vietnam War.

Anti-bombing sentiment rose to the point that, for example, RAF Bomber Command aircrew were denied a medal (a clasp for the 1939/45 Star balancing the Battle of Britain clasp awarded to qualifying Fighter Command pilots) until 2013, even though bomber aircrew suffered almost the highest casualty rates of any service arm. No less than 55,000 or 44% of RAF bomber aircrews were killed in action, and many more were injured or were shot down and became prisoners of war. Over 12,000 bomber aircraft, approximately 30%, were lost. Of all the loss ratios of all services on either side, only Kriegsmarine U-Boats and U-Boat crews had higher loss ratios.

The two sides of the debate can be exemplified by these two memos written following the raid on Dresden in February 1945, one by Churchill and a reply by Bomber Harris.

It seems to me that the moment has come when the question of bombing of German cities simply for the sake of increasing the terror, though under other pretexts, should be reviewed. Otherwise we shall come into control of an utterly ruined land … The destruction of Dresden remains a serious query against the conduct of Allied bombing. I am of the opinion that military objectives must henceforward be more strictly studied in our own interests than that of the enemy.

The Foreign Secretary has spoken to me on this subject, and I feel the need for more precise concentration upon military objectives such as oil and communications behind the immediate battle-zone, rather than on mere acts of terror and wanton destruction, however impressive.

Attacks on cities like any other act of war are intolerable unless they are strategically justified. But they are strategically justified in so far as they tend to shorten the war and preserve the lives of Allied soldiers. To my mind we have absolutely no right to give them up unless it is certain that they will not have this effect. I do not personally regard the whole of the remaining cities of Germany as worth the bones of one British Grenadier.

All these discussions of strategic bombing precede, of course, the bombing of Hiroshima and Nagasaki in August of 1945.

It is interesting to contrast these two reports by the semi-official British Pathe news organization. In the first clip the deaths of civilians in Coventry are described as murders, whereas the second clip celebrates the deaths of German civilians in Hamburg in 1943.

Watch video #1 Watch video #2
As for London, my home town, this interactive site offers a dramatic visualization of the destruction.
Bombsite.org 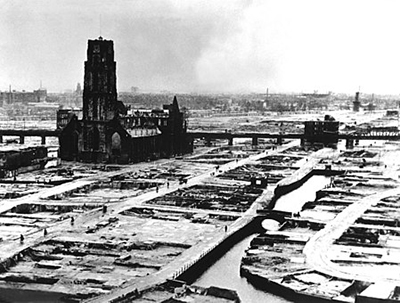 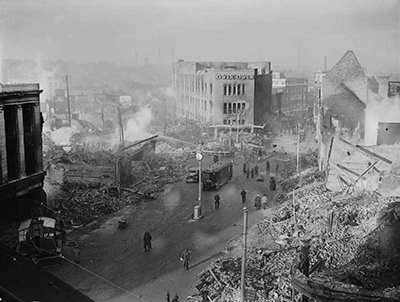 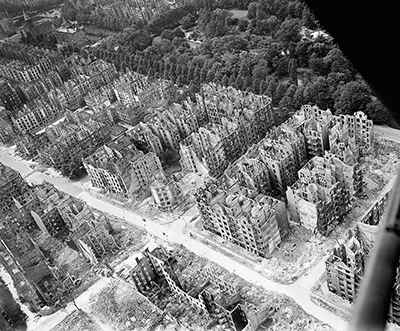 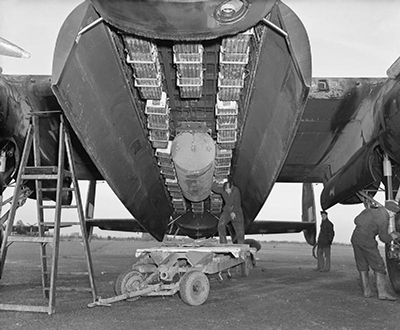 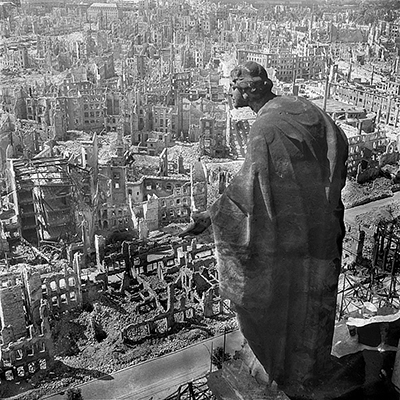 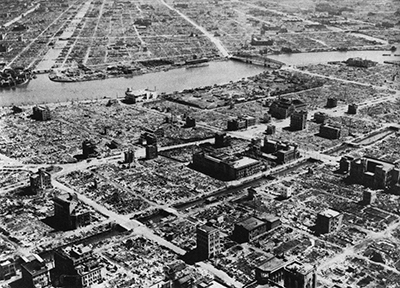 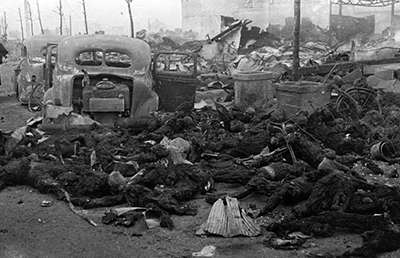 Pile of incinerated civilians in Tokyo 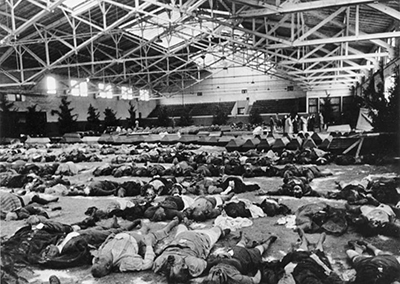 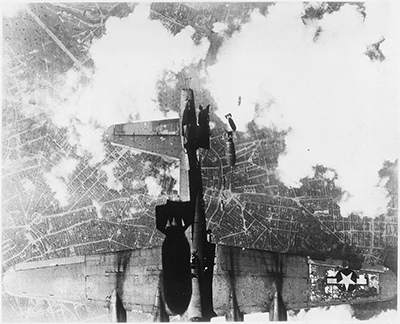 A B17 accidently bombed by another 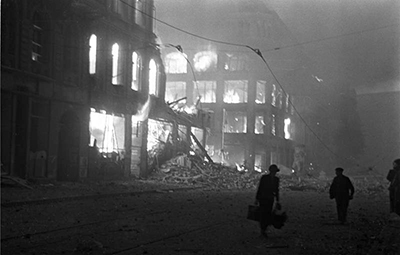 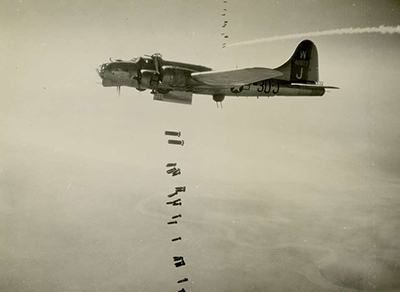 B17 dropping bombs over Berlin 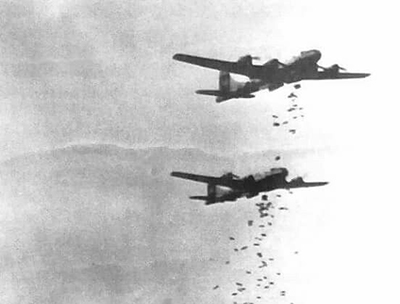 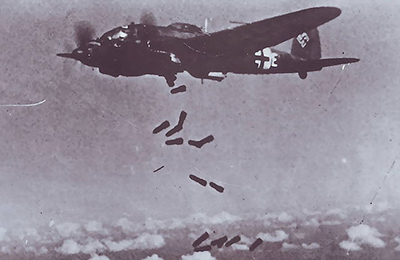 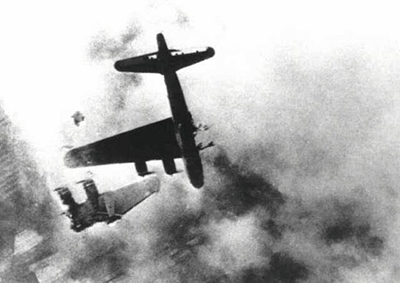 ← A Slender Thread — The Saga Continues In Praise of Model Trains →