As October 1940 progresses the Battle of Britain seems to be descending into mindless violence.

It is obvious that the Luftwaffe cannot defeat Fighter Command in daylight, but it continues to try to do so whenever the weather and Goring’s shifting moods permit. This week alone, (October 11th to 18th, 1940), the Luftwaffe loses 104 airmen and 94 aircraft against the RAF’s 31 airmen and 54 aircraft.

Yet Goring thinks (or says he thinks) that everything is going well. He tells his aircrews:

‘In the past few days and nights you have caused the British world enemy disastrous losses by your uninterrupted destructive blows. Your courageous, indefatigable attacks on… the City of London… have reduced British plutocracy to fear and terror. The losses you have inflicted on the much-vaunted Royal Air Force in determined fighter engagements are irreplaceable.’

The New York Herald Tribune, published in peaceful, bustling Manhattan, understands the situation far better than Goring and explains to its readers:

‘What appears to be happening is that the Germans have found defenses too strong for their daylight attack, that permits accurate fire, and so are putting their effort into night attack… but against a people of courage it is unlikely to prove fruitful… and there is no doubt of British courage.’

Indeed there was no doubt of British courage. The young men of Fighter Command continued to fly, and the people, faced by wanton savagery night in, night out, absorbed the blows with stoicism…

… Meanwhile, Goring soldiered on as best he could. 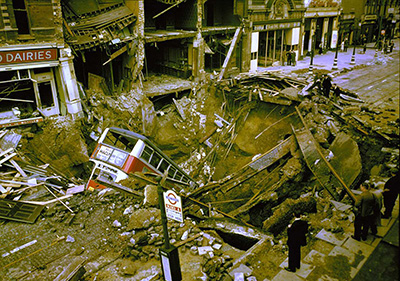 ← Prev: Why remember history? Next: Reflections on the Battle of Britain →