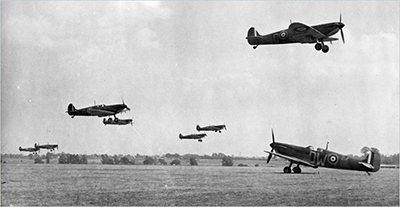 She stood by Pound outside the office and watched the pilots clambering into their Spitfires, with the ground crews hovering about them. She watched a sergeant standing on the wing of Johnnie’s aircraft, helping him strap in. A Merlin engine stuttered to life, and then another and another, filling the air with a shattering roar that beat upon her with a physical force.

Johnnie’s sergeant was leaning over and shouting in his ear. Johnnie gave him a thumbs-up. The warrant officer emerged from the operations hut and fired a Very pistol into the air. The roar of the Merlins rose to a primeval scream, as if they were flexing their muscles and exulting in their power. Now she and Pound were buffeted by the tornado of their prop wash, which tore at their uniforms and sent Eleanor staggering backward. Her hairpins surrendered to the onslaught, and her hair flew out behind her.

The Spitfires began to lumber forward, looking like an ungainly gaggle of geese as they rocked and bounced on the uneven surface of the field. Their tails came up, and they steadied, receding rapidly across the field. Johnnie’s aircraft lifted its nose, as if sniffing the breeze, and then rose smoothly into the air, launching itself like a pole-vaulter. The other Spitfires lifted in his wake, ugly goslings no more, transformed into masters of their natural element.

The gale of 339’s prop wash died away, and the sound of the Merlins weakened to distant thunder. The aircraft grew smaller as they climbed higher and higher.

As if all were one, the squadron wheeled toward the south, presenting their silhouettes to her, their cockpit canopies catching the sun like diamonds, and passed from her sight behind the trees. She noticed that every single person on the station had come out to watch 339 off, and now they stood about in awkward, angular postures as if uncertain what to do next, straining to hear the last ebbing throbs of 339’s departure.

The airfield seemed shockingly empty without the Spitfires, no longer an RAF station but a large, silent field with a long row of huts beside it.