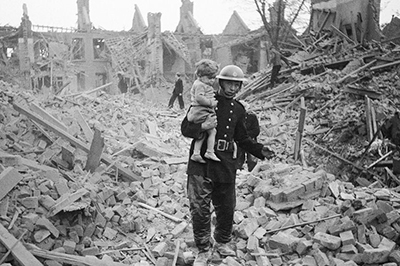 “Ignore him, Miss! What do you think’s going to happen?” the woman broke in, and Eleanor saw the other customers lean forward to hear her answer.

“It will go on. Hitler’s failed to beat the RAF, so he’s turned on London. He’s trying to break our will to fight. He thinks he’ll win if he bombs enough of us out of our homes and kills enough of us.”

“Screw him!” the woman spat.

“So he’ll keep bombing,” Eleanor continued. “It will take a week or two, but his losses will get higher and higher as the RAF shoots down more and more of his aircraft. Then he’ll have to bomb at night, under cover of darkness. When he stops bombing by day and bombs only by night, you’ll know he’s lost the war.”

“How will we know that?” the woman asked.

Strictly speaking, Eleanor thought, according to minimax theory, if we put up with this, we won’t lose, but still …

The woman paused to check Eleanor’s logic, just as Pound might have done.

“Well, then, let him do his worst,” she said. “In fact, if you’ll excuse my French, fuck Adolf Hitler, and fuck the Luftwaffe for good measure.”