History of A Slender Thread

Malta is a small archipelago of islands southeast of Sicily in the Mediterranean Sea. The vast majority of the population lives in and around the capital city of Valletta, a splendid natural harbor on the eastern side of the main island.

The main island is approximately 17 miles long and 9 miles wide. The entire country is about the size of the Isle of Wight, and less than half the size of New York City.

Malta has been continuously lived on since 6,000 BC and has some of the oldest known Neolithic sites in Europe, with stone buildings, assumed to be temples, dating back to almost 3,500 BC (a thousand years older than Stonehenge.) Malta has its own unique language derived from Arabic, from the era of the Fatimid Caliphate, and from Latin languages (French and Italian) from the subsequent Norman era. The British population during World War II was a relatively thin veneer of colonial, commercial, and naval/military ex-patriates.

As a small but strategically desirable island, Malta’s long history was, until recently, a series of occupations by more powerful nations, including the Phoenicians and Carthaginians, the Romans and  Greeks,  Arab Caliphates, the Normans, the Aragonese, the Knights Templar of St. John, the French and British. The British acquired Malta from France in 1807, during the Napoleonic wars, and it remained a British Crown Colony until gaining its independence in 1964. Malta is now a member of the European Union.

Located between Sicily and Libya, Malta was one of the two or three most important strategic locations in World War II. Like Stalingrad and Iwo Jima, for example, its survival or loss was pivotal to the outcome of the war. 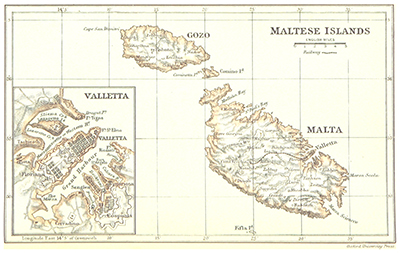 The Siege of Malta

As soon as Italy entered World War II as a belligerent in June, 1940, Mussolini set out to capture Malta. He planned to accomplish this by:

If Malta could be sufficiently beaten down, the island would be finished off in a combined air/sea invasion, code-named ‘Herkules.’

Over the two years that the siege lasted the Axis powers conducted more than 3,000 air raids and dropped almost 7,000 tons of bombs on Valletta alone, making it one of the most bombed cities in the world.

However, the island never quite ran out of supplies—although it came perilously close to doing so, and Malta-based naval and air units carried out numerous successful attacks on Axis bases and convoys.

Such was the bravery and determination of the people of Malta in the face of this onslaught that in 1942 King George VI awarded them Britain’s highest civilian award for bravery, the George Cross,  a unique distinction:

To honour her brave people I award the George Cross to the Island Fortress of Malta to bear witness to a heroism and devotion that will long be famous in history.
George R.I.
April 15th 1942

(Although the people of Malta subsequently demanded and received full independence from the United Kingdom, they chose to retain this award as part of their flag.)

British defensive operations consisted of defending relief convoys from Axis attacks and defending Maltese airspace. The balance of forces shifted back and forth, partly because of diversions of resources to other fronts; for example, Axis air resources were diverted to the Russian Front when Hitler launched Barbarossa in June 1941, and to support the Axis invasions of Greece and Crete.

Although the bulk of the attacks against Malta and the convoys were conducted by the Italians, the absence or presence of the Luftwaffe seems to weighed the balances heavily.

The siege of Malta was finally lifted at the end of 1942, with the British victory at El Alamein at one end of the Mediterranean and Operation Torch, the Anglo/American invasion of Morocco, at the other. 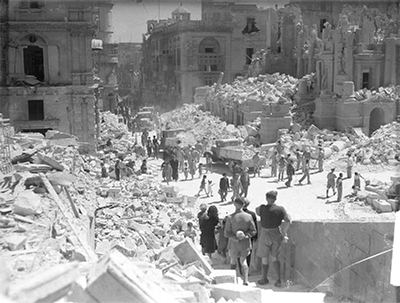 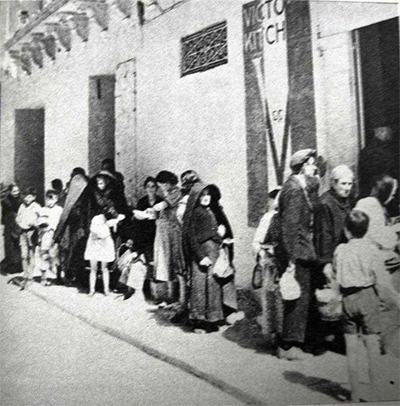 Supply convoys were run to Malta from both Alexandria in Egypt and from Gibraltar. Three main strategies were attempted:

The Axis powers used four main strategies against the convoys:

For long periods between June 1940 and August 1942 the Axis powers were successful in operations against the convoys. Of the 35 major convoys over this period, 8 failed to deliver any supplies at all and only 2 arrived in Malta without losses.

The most famous of these convoys sailed in August 1942 under the codename Pedestal. (I named my fictitious Podium in honor of the men of Pedestal.) Pedestal consisted of 71 warships escorting 14 merchantmen. The Royal Navy lost 4 ships sunk (including an aircraft carrier) and 3 damaged (including another aircraft carrier.) Of the 14 merchantmen, 9 were sunk and 3 were damaged. The Navy had 102 aircraft of which 34 were destroyed. Approximately 550 men died.

This convoy included the tanker SS Ohio, carrying 10,000 tons of fuel. Ohio, nicknamed ‘the ship that wouldn’t die,’ was bombed repeatedly and reached Malta under tow, awash to her gunnels, strapped between two destroyers to hold her up, with two crashed bombers on her decks. She sunk as soon as the vital fuel was pumped out of her. Her civilian captain was awarded the George Cross.

For more on Pedestal, visit my blogs. 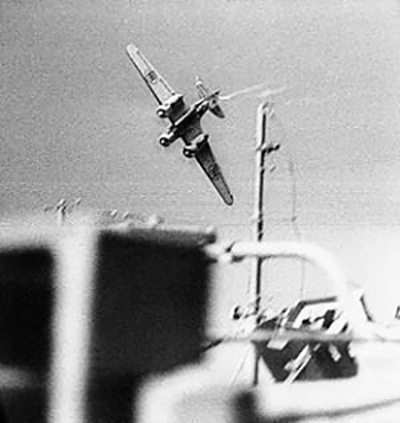 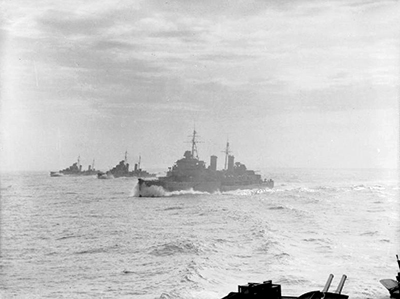 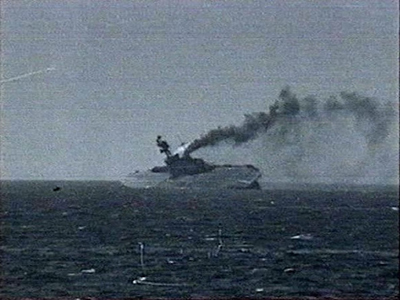 At the very beginning to the siege of Malta in 1940, when Italy entered the war and began bombing Malta, the only fighters in Malta were a few Gloster Sea Gladiator aircraft which had been delivered, unassembled, to Hal Far (FAA St. Falcon.) Only two or three were operational at any time. The Gladiators flew against vastly superior numbers of Italian aircraft, which were faster than them, and achieved some successes, although the exact number of victories remains obscure. Hurricanes started to be flown in in August, but in woefully small numbers.

The Gladiators were named (after the event) Faith, Hope, and Charity and became symbolic of Malta’s resistance. Charity was shot down in July, 1940, and Hope was destroyed in February 1941. Faith survived and is on display in Malta. 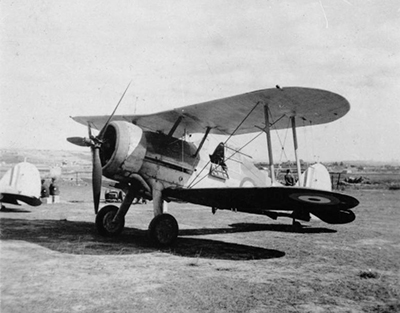 The air battle over Malta went through several phases as the pendulum of air superiority swung back and forth. Italian bombing efforts were relatively consistent, with hundreds of aircraft flying from bases in Sicily and the toe of Italy for two full years.

The pendulum swung heavily in favor of the Axis powers when the Luftwaffe was able to concentrate on Malta, rather than its competing priorities in Russia, Greece and Crete. Axis control of Malta’s skies reached its pinnacle in March and April of 1942, when they were able to bomb Malta’s airfields continuously (dropping 1,600 bombs on Luqa in one day, for example) and severely damage the submarine base at Manoel Island, forcing the submarines to submerge all day.

All this neutered Malta as an offensive base for bomber and submarine attacks against Rommel’s convoys. The RAF began flying in Spitfires from Club Runs but almost all were destroyed on arrival. For several days in April there were no operational Spitfires on Malta at all.

Albert Kesselring reported to Berlin that “There is nothing left to bomb.” The determination of the Axis effort against Malta is indicated in the sorties flown. Between 20 March and 28 April 1942, the Axis flew 11,819 sorties against the island and dropped 6,557 tons of bombs (3,150 tons on Valletta.)

With Malta’s airfields and submarines under siege, Axis convoys were able to reach Rommel without significant losses.

The pendulum swung back when the Club Runs were finally able to deliver a significant number of Spitfires. Axis losses mounted steeply (for example, the Regia Aeronautica and Luftwaffe lost 100 aircraft over Malta in only two days in May.)

Inversely, as the Spitfires recovered control, so that Malta’s bombers and submarines could reopen their offensive, Rommel’s supply convoys immediately suffered increasing losses. 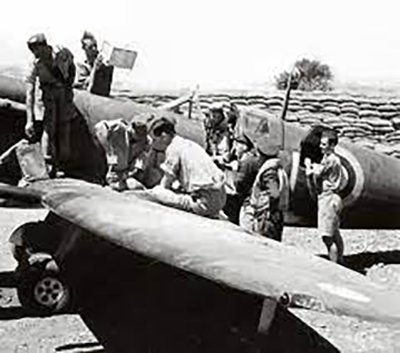 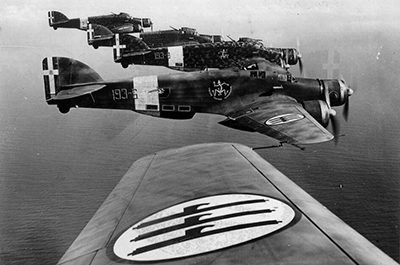 Most of Rommel’s supplies came from Italy, being loaded primarily in Naples. The question was how to get his supplies from there to North Africa. The answer was keeping as far away from Malta, with its submarines and torpedo bombers, as possible. In the months leading up to El Alamein in October, 1942, Rommel held all of Tunisia and Libya, giving him ports (from west to east) at Tunis, Tripoli, Benghazi and Tobruk.

The safest route was from Naples north of Sicily to Tunis, but Tunis was hundreds of miles from the front lines and all Rommel’s supplies had to be dragged by road or rail. Tripoli was closer to Rommel, but reaching Tripoli required sailing close enough to Malta to be in danger. Benghazi and Tobruk were closest to Rommel, but, to avoid Malta, convoys had to go far north, from Italy to Greece, and then approach Africa from Crete.

Not only were these routes vulnerable to attacks from Malta (with Rommel losing a quarter to a half of all his supplies in September and October,) these routes were two or three times as long as the direct routes.

The Second Battle of El Alamein began on October 23rd, 1942 and lasted until November 11th and resulted in a decisive British victory. It is said (incorrectly) that before El Alamein the British never won a battle and after it the British never lost a battle. Montgomery’s Eighth Army had almost twice as many men as Rommel’s German/Italian Panzerarmee Afrika, twice as many tanks, almost twice as many artillery pieces, and several times as much fuel, all due, in large part, to RAF and naval forces based in Malta. 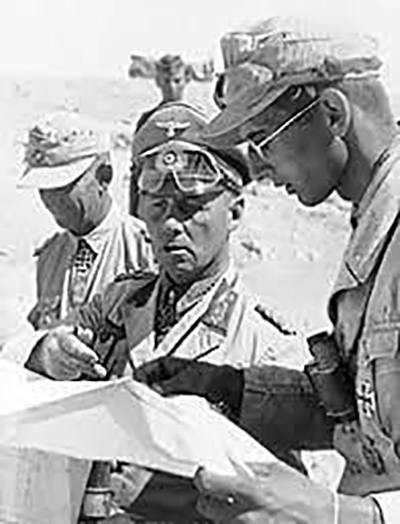 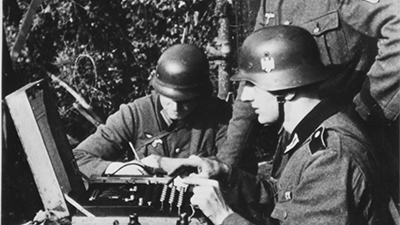 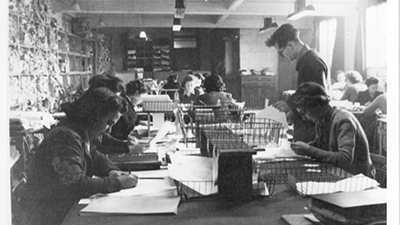