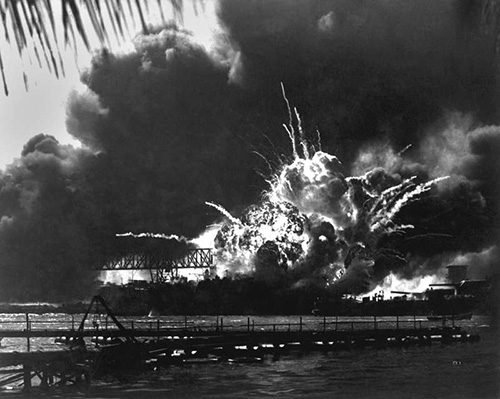 On December 7th, 1941, the Japanese Empire attacked the United States Pacific Fleet as it lay at anchor in Pearl Harbor. The event, described by President Franklin Delano Roosevelt as a ‘Date which will live in Infamy’ brought the United States into World War II.

Some 350 Japanese aircraft launched from six carriers bombed and strafed the fleet and adjacent military installations. Eight battleships were sunk or damaged. Across the Pacific the Japanese also launched simultaneous attacks on American and British interests in Southeast Asia.

These attacks marked the end of the beginning of the war, which had already been raging in Europe since 1939 and had already engulfed China, Russia, and northern Africa. Now that the United States was engaged, the war was truly a world war.

Four years later the great cities of Germany and Japan lay in smoldering ashes. The Japanese surrendered unconditionally aboard a US Navy battleship in Tokyo Bay.

Now she remembered everything: coming in flying low over the anchorage with all the battleships lined up in the early light of a beautiful dawn; circling Hickam Field and approaching for landing, with the noise of the lowering wheels in the slipstream; a sudden row of bullet holes appearing in the side of the fuselage just ahead of her, as if sewn perfectly by a Singer machine; the violent rearing of the cabin as the pilot took evasive action; a fleeting glimpse of another aircraft flashing past her window; bodies and the luggage flying everywhere; a harsh CRASH as the plane landed so heavily the wheels snapped off; more perfect rows of holes, this time accompanied by loud noises and a sudden scream of pain from one of the other passengers—yes, it was the admiral who had told her he was satisfied with the forward deployment of the fleet;  the agonizingly loud screeching of the metal belly of the aircraft as it careened down the runway in a cascade of sparks, as if she were riding a firework rocket or a shooting star; the sudden softness of a woolly wall of impenetrable darkness at the end of the runway which gave way, in due course, to the sounds of the Chattanooga Choo Choo.