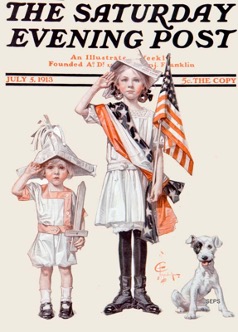 When I was eight or nine I decided to become an American.  I discovered America in my local barber’s shop where they had old copies of the Saturday Evening Post. Turning the pages slowly, I glimpsed a world immensely more desirable than my own, and I decided, there and then, that I would one day cross the Atlantic and make America my home.

Well, first of all, I was growing up in the grimmer parts of South London. The shabby streets were pock-marked by bombed-out buildings and the air was heavy with smog and soot, and it really did rain almost every day. Food and clothing were rationed and everything seemed worn out. England may have been on the winning side in World War II, but the war effort had left the country exhausted.

The Saturday Evening Post, by contrast, showed me a country with immaculate towns and exuberant cities, lit by vivid sunshine. Everyone was well-fed, everyone had a refrigerator, all the girls were pretty and all the men were strong and handsome. I remember being particularly struck by the enormous cars—always convertibles—that everyone drove.  This was clearly a country flowing with milk and honey, as the bible said.

Second, and even more important, America was good. The Saturday Evening Post covers were painted by artists like Norman Rockwell and featured men and women of immense generosity and wisdom. This was a country of community spirit populated by good Samaritans. I didn’t need to be told: it was inherent in every brushstroke.

This impression of ‘America the Good’ was reinforced by two movies I saw, both westerns and both, as I interpreted them, morality plays: High Noon, released in 1952, and Shane, released the following year. Their heroes were far from perfect, but they were determined to do the right thing—to fight against the forces of evil—regardless of the danger and personal cost involved.

And so I sat waiting my turn in the barber’s chair, leafing through a worn copy of the Post, lost in the wonderful images of the country I swore would one day be mine. That was all a long, long time ago but, suffice it to say, I did cross the Atlantic and I did find a land of opportunity and nobility of spirit.

It has become fashionable to sneer at the flag, or burn it, or turn away in trendy disgust; but on the 4th I, American, will salute the flag with pride and gratitude.