The Siege of Malta

Operation Pedestal was a relief convoy, escorted by the Royal Navy, bringing supplies to the embattled island of Malta in 1942. Pedestal set sail from Gibraltar on August 9th, 1942, and reached Malta between August 13th and August 15th.

Pedestal was attacked by German Kriegsmarine U-Boats and Luftwaffe bombers, Italian Regia Aeronautica bombers, and Italian Regia Marina submarines and MAS Motor Torpedo Boats. A planned attack by Regia Marina cruisers and destroyers was averted by the Royal Navy submarine Unbroken. Reichsmarschall Herman Göring sent a message to the Luftwaffe that the Luftwaffe ‘will operate with no other thought in mind than the destruction of the British convoy … The destruction of this convoy is of decisive importance.’

Pedestal consisted of 14 merchantmen escorted by approximately 70 naval ships (including diversionary and auxiliary operations.) Of the 14 freighters, 9 were sunk, 3 arrived in Malta damaged and only 2 arrived undamaged. Melbourne Star, Port Chalmers and Rochester Castle arrived in Valletta’s Grand Harbor on August 13th; Brisbane Star arrived on the 14th; and the SS Ohio reached Malta on the 15th. Ohio, ‘the ship that wouldn’t die,’ deserves a blog of its own.

The map illustrates the principal attacks on Pedestal as it approached Malta. Let us now see this map from another perspective: 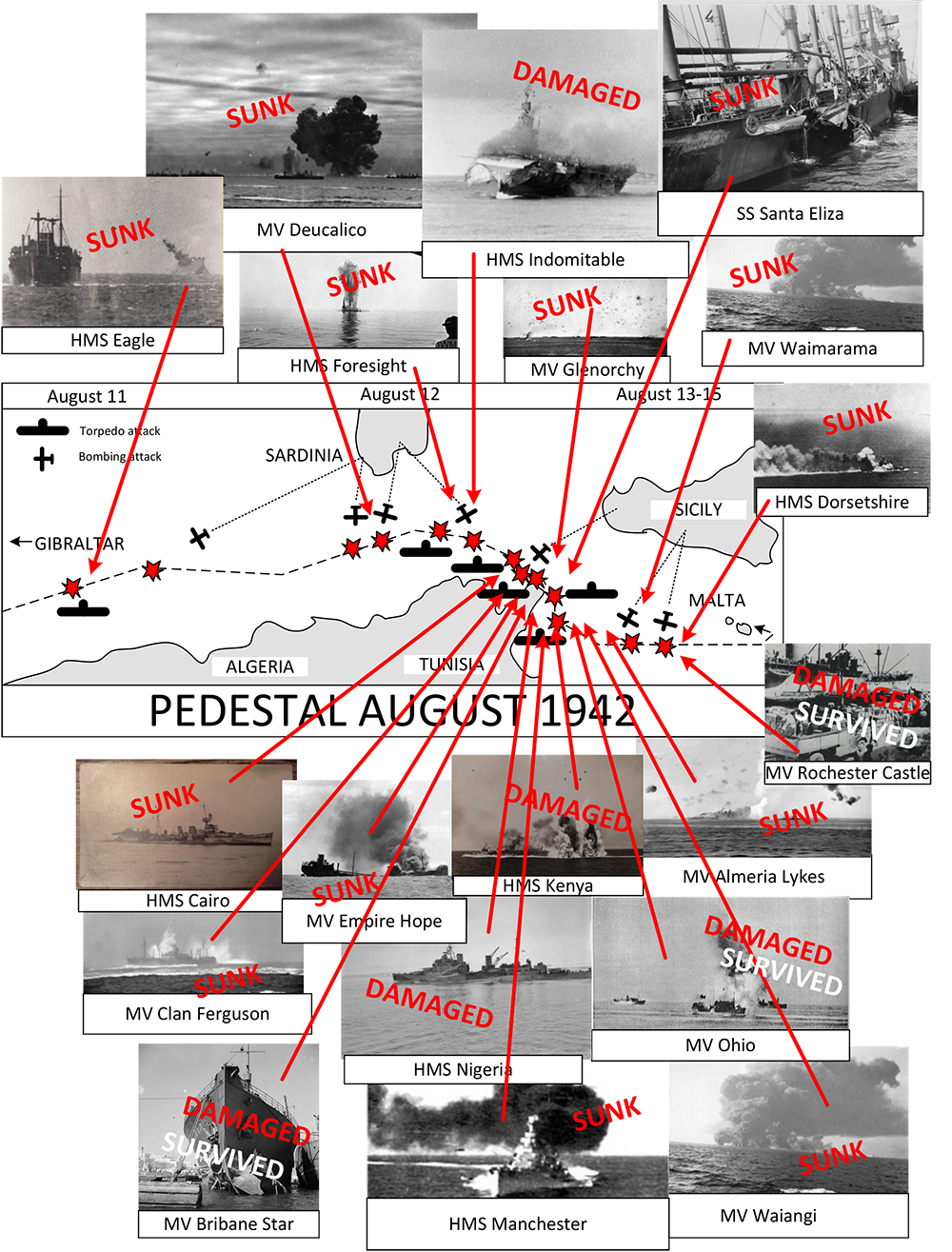 In my next novel, A Slender Thread, Eleanor analyses the cost of the convoys.

“There have been thirty-five significant convoys to date,” Eleanor was continuing. “I exclude solo dashes, ‘Club Runs’ delivering aircraft, and our submarines making ‘Magic Carpet’ runs, although I do not do so to diminish these magnificent efforts. Fourteen merchant shipping convoys sailed in 1940, fifteen last year in 1941, and six have sailed so far this year. Some of these have been complex multi-part operations involving several naval task forces, such as the combined Operations Harpoon and Vigorous sailing from Gibraltar and Egypt simultaneously this past June.”

She paused, as if considering how to continue.

“Needless to say, these operations have been successful in the sense that we are still here. The purpose of the convoys is to supply us and we have been supplied. However, these operations must be considered, from a mathematical assessment, to be disasters. The combined Harpoon and Vigorous convoys, for example, consisted of seventy naval vessels, not counting MTBs, submarines, and other auxiliaries. These seventy fighting ships escorted eighteen merchant ships.”

“Of the eighteen merchant ships that sailed, only two reached Malta. Sixteen did not. Two out eighteen is not a winning ratio.”

It was as if she had reached out and slapped everyone in the room on the face.

In my next blog we’ll explore the remarkable story of the Ohio, the ship that wouldn’t die.