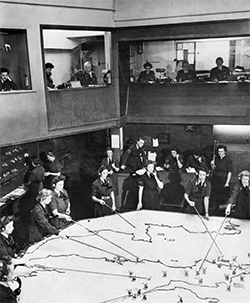 On September 15th, 1940, Winston Churchill spent the day at 11 Group Headquarters in Uxbridge, in the operations room now known as the Battle of Britain Bunker. It is a remarkable coincidence that he was there to witness what we now consider to be the climax of the Battle of Britain.

That afternoon, in the face of wave after wave of Luftwaffe bombers, supported by even greater numbers of Messerschmitt 110s and 109s, Keith Park committed every 11 Group squadron, plus the ‘Duxford Wing’ from 12 Group, plus two squadrons from 10 Group.

Churchill, watching from the gallery above the map table, then asked Park his famous question: “What reserves have we?”

As Churchill later wrote: “The odds were great; our margins small; the stakes infinite.”

One wonders what Churchill must have thought as he watched the WAAFs moving the markers denoting Luftwaffe formations across the map table toward London, advancing relentlessly.

The fate of the world, not just the fate of London, hung in the balance. “What a slender thread the greatest of things can hang by,” he had said earlier in the summer, as France collapsed before the German onslaught.

One wonders if Churchill might have reflected that Park’s squadrons and their pilots were the slender thread upon which the outcome of the war depended. One wonders if he might have thought that, if 11 Group buckled, as France had buckled, the thread might snap. One wonders if he pondered that, if Park made a tactical error in deploying his outnumbered squadrons, then he, Churchill, might soon be Adolf Hitler’s special guest in Spandau Prison in Berlin.

But 11 Group did not buckle. Park made no error. The thread did not snap. 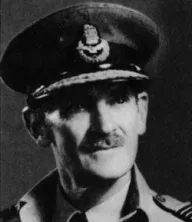 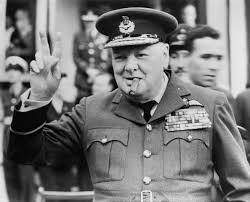