The March of Folly II 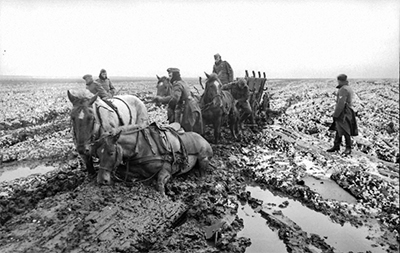 My second blog for this March of Folly takes as its theme Karl Marx’s famous aphorism that: ‘History repeats itself, first as tragedy, second as farce.’ i

Never has the idea that history repeats itself been clearer than in Hitler’s decision to replicate Napoleon’s invasion of Russia. Napoleon’s folly, one might argue, was the lesser, because no-one had attempted to invade Russia from Europe since Charles XII of Sweden’s failed attempt a century before, and Napoleon could be forgiven for underestimating the difficulty. But Hitler had the example of Napoleon’s disastrous failure clearly before him, in well-documented detail, and yet he chose to undertake a very similar exercise.

In brief, in 1812 Napoleon controlled almost all of Europe and had never been defeated in battle. Russia was rich in natural resources and poorly defended. In June he led his army of almost 500,000ii men, the Grande Armée, the greatest army ever assembled until that time, into Russia. By September he reached and occupied Moscow.

He was apparently triumphant, but his supply lines were overstretched and could not feed and equip his army. The Russians retreated but did not surrender. Napoleon was forced to retreat as winter set in, and the retreat became a disaster as his men and their horses starved and froze to death. In December the Grande Armée, now reduced from 500,000 to approximately 10,000 men, left Russian soil—a loss rate of 98%.

In June 1941, 129 years later, Hitler launched his invasion of Russia, Operation Barbarossa. By December he was within a few miles of Moscow, but never managed to capture it. He, too, was forced into a long and agonizing retreat with chaotic supply lines and merciless weather. At the start of the campaign he had approximately 3.5 million men but lost approximately 1 million—1 million!—in the first 9 months. Many, many more would die as the campaign dragged on; he was not finally forced out of Russia until 1944 following a long and bitter war of attrition.

In some ways the two campaigns were radically different, in spite of their common result; Napoleon’s campaign took place before the industrial revolution in the 19th century, while Hitler’s took place after it.  Thus while Napoleon used mounted cavalry to punch holes in the enemy lines, for example, Hitler used Stuka dive bombers and Panzer tanks.

But in other ways both campaigns were the same, and, in particular, both Hitler’s and Napoleon’s army were fatally weakened by their poor logistics—very long lines of communication over very harsh territory with the Russian defenders using ‘scorched earth’ tactics. Both Hitler’s and Napoleon’s armies needed to be able to survive a very harsh winter hundreds of miles from home, and both failed to do so.

Of even greater importance, both Napoleon and Hitler depended on horses, and that proved to be decisive.

Horses on the road to Moscow late in 1941

Horses on the road to Moscow late in 1812

Horses, you ask? Why were horses so important? Well, obviously Napoleon’s supplies had to be hauled from Eastern Europe on horse-drawn carts—this was long before steam engines or motor vehicles. But so were Hitler’s; he had decided to focus all his military investments into weapons, rather than investing in trucks and transportation, and relied on horses to haul his supplies and his artillery. The gasoline that powered the Panzer tanks was pulled to the front line by horses: it would have been farcical if the suffering of the horses had not been so tragic.

Hitler took no less than 600,000 horses to Russia when he invaded. Military horses require approximately one man per horse to handle them, for feeding, stabling, hitching, leading, etc., so 600,000 men were required. Thus Hitler needed to feed and supply 600,000 horses and 600,000 men if he wanted to move his army from Point A to Point B.

Napoleon took an estimated 150,000 horses to Russia, and lost all but a handful to starvation and hyperthermia. Sticky mud destroyed the roads in the fall and froze hard in October. The horses could not get traction on either surface and had no protection from the bitter cold, day or night. Napoleon lost all his supplies and all his artillery. There was nothing for the French soldiers to eat but the carcasses of their dead horses.

Hitler lost approximately 50,000 horses a month from September 1941, on. A German soldier is quoted as saying: ‘A curious odor will stick to this campaign, this mixture of fire, sweat and horse corpses.’

The Panzer gets the attention but the horse does the work 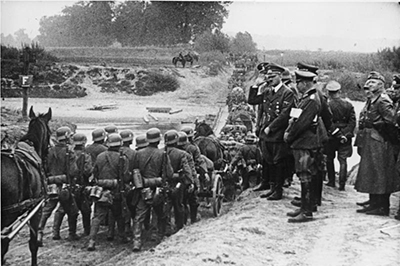 My protagonist Eleanor was in Russia in 1941 in Infinite Stakes, and foresaw the result.

A;   Barbarossa, the German invasion of Russia, was at the end of June. I was sent to Washington at the beginning of July, and the MAUD report came out while I was there. The Riviera conference in Canada was in August, in 1941, and the Caviar conference was in September.

A:   Correct. All through this period everyone was focused on the German advance. They were approaching Moscow—they got within ten miles. Most people, including the Americans, thought they would capture the city.

Q:   But you did not, because of Hitler’s horses!

A:   The horses and the snow. It began to snow at the beginning of October, and the German advance, known as Operation Typhoon, got bogged down—quite literally. Belarus and Estonia turned into a sea of mud. It took the Germans until the beginning of December to get to the outskirts of Moscow, but by then it was too late. Marshall Zhukov counterattacked and the undefeatable German army was defeated.

A:   A horse can pull, order of magnitude, 150 lbs. for twenty miles in a day. Hitler had 600,000 horses in Russia, a staggering number, so he could move almost a million tons of materiel a mile every day.  Now, it is almost exactly 1,000 miles from Berlin, in eastern Germany, to Moscow. So a horse can move 150 lbs. from Berlin to Moscow, on average, in fifty days. But a horse eats about 15 lbs. of fodder a day.

A:  So … a horse can only haul its own food less than half the distance from Berlin to Moscow, not all the way. Hitler should have stopped in Minsk.

A:   Fortunately for the world, I am not. Given the values I have indicated, for how much a horse eats every day, how much it can pull, and so on, ‘x’ is indisputably the distance that Hitler’s supply lines could stretch. Solve for ‘x.’

So, why did Hitler invade Russia? There are many opinions, but among them are:

Yes, history repeats itself, first as tragedy, second as farce.

[i] That quote, in itself, contains a farce. Just as Ilsa in Casablanca never said ‘Play it again, Sam,’ and Dorothy in The Wizard of Oz never said ‘Toto, I’ve got a feeling we’re not in Kansas anymore,’ Marx never said ‘History repeats itself, first as tragedy, second as farce.’ He actually said: ‘Hegel remarks somewhere that all great, world-historical facts and personages occur, as it were, twice. He has forgotten to add: the first time as tragedy, the second as farce.’― Karl Marx, The Eighteenth Brumaire of Louis Bonaparte, published 1852.

[ii] Estimates for the numbers of men and horses involved vary substantially between historical sources. Rather than quote numbers in ranges and clutter up the text with caveats, I have used ‘reasonable’ estimates.

← Prev: A March of Folly Next: Just Another Monday →