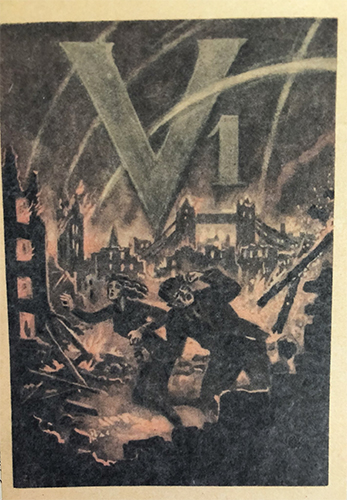 In June 1944, exactly one week after D-Day, and 77 years ago this month, the first V1s started landing in England. By the end of the month dozens were landing on London every day. Like many armaments the V1 was both an engineering triumph and a ruthless weapon.

The V1 was the first cruise missile. It was an unmanned ‘flying bomb’ resembling a bulbous aircraft with stubby wings, powered by a pulsejet. The missile was a little less than 30 feet in length and carried almost 2000 lbs. of high explosive. It flew at approximately 400 mph (as fast as the fastest aircraft) usually at heights between 2,000 and 3,000 feet.

The missile was launched up a steep ramp by a steam-driven catapult and directed itself to its target (within an accuracy of about 10 miles) and then simply turned itself off, causing it to fall into the ground at a steep angle and explode. Since the target was the whole of London, no better accuracy was needed.

The pulse jet was a rocket that fired in very short bursts—42 times a second, producing a very loud buzzing sound. V1s became known as ‘buzz bombs.’ Londoners would hear the bomb approaching. If it went silent they would know it was about to fall—a terrifying effect. (The later V2 rockets were supersonic and exploded before the sound of their approach reached listeners on the ground.)

V1s had a short range and were initially launched from northern France against London. As the Allies advanced from Normandy and overran these sites the strategy changed and the bombs were directed against cities the Allies had liberated, the port of Antwerp in particular.

The two primary defenses against V1s were anti-aircraft fire and fighter interceptions.

Initially the missiles were much too fast for anti-aircraft guns to bear, but American radar fire control systems developed by Bell Labs, and American proximity fuses (designed to detonate the shells when they were close enough to knock down the V1) solved these problems, and by the end of the V1 campaign 60% were being shot down.

The missiles were as fast as, or faster, than the fastest Allied fighters, which had to be modified to increase their speed. Several types of aircraft were used, including P47 Thunderbolts, P51 Mustangs, and Spitfire Mark XIVs, but the most successful were Hawker Tempests and De Havilland Mosquitos. One of the most dramatic forms of interception was for the fighter to fly within a few inches of the missile to upset its gyro’s balance and flip it over—at 400 mph!

Between June and September, 1944, approximately 10,500 V1s were launched against England, of which some 2,400 hit London and 4,300 were shot down. The remaining 3,500 crashed and exploded elsewhere. A million structures were damaged or destroyed and 22,000 civilian casualties were inflicted. Contemporary Allied analysis concluded that V1s (or similar missiles) were much more cost-effective than conventional bombers. 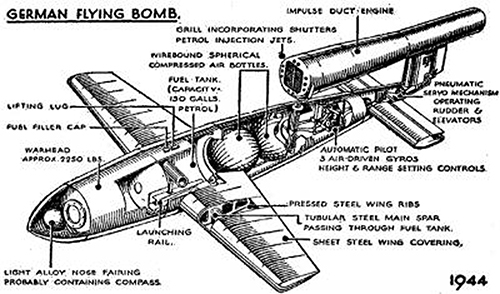 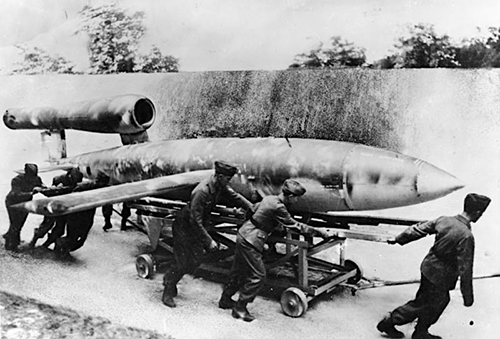 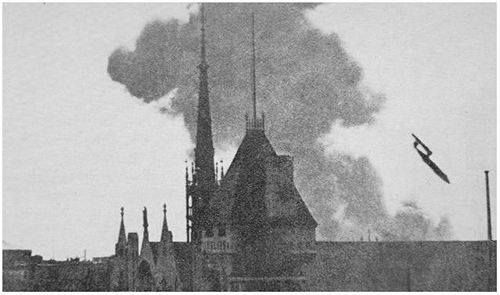 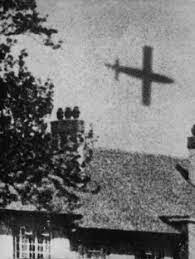 The V1 menace evaporated as the Allies advanced across Europe and captured the launching sites, but the very last V1s were launched right up to the end of the war in May, 1945.