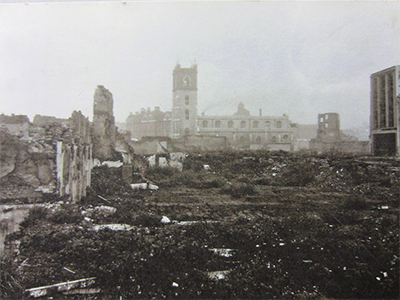 On August 24th 1940 Luftwaffe bombers accidently bombed the area of London known as Cripplegate, close by a gate in the ancient Roman wall. The damage was minor in comparison to later attacks, but it had a great psychological impact—the first attack on London, and on a civilian area to boot— and Churchill ordered a retaliatory attack on Berlin for the following day, in part to embarrass Herman Goring, who had publicly announced that the RAF was incapable to bombing Berlin: “If one enemy bomb falls to Berlin, you can call me ‘Meyer.’” (For this reason, later in the war hard-hit Berliners referred to air raid warning sirens as ‘Meyer’s trumpets.’)

Eleanor, my fictional protagonist in my novel Breaking Point and the forthcoming sequel Infinite Stakes, was in RAF Uxbridge at the time, formulating the early version of her zero-sum strategic model of the Battle of Britain. She wrote to her great-aunt Charlotte Oxborough.

The war is growing and spreading like some horrid contagion—now the Nazis have bombed London. My boss, Keith Park, thinks it was probably a mistake, a navigational error, but I’m sure Mr. Churchill will order some kind of response. So now we don’t just have wars between armies, or air forces, we have wars between civilian populations. I remember being taught that the course of human history was an evolution from the brutal, ancient dark ages, to a finer, more civilized world. I am beginning to doubt it: Genghis Khan did not have high explosive bombs.

I have solved my conundrum of what I can write to you by writing what I think is important, but not posting the letters. I will save them up and give them to you when I see you.

I am extremely busy and very excited to be part of 11 Group. I’ve been here just about a week. It is so much more important that serving as a humble handmaiden to pontificating fuddy-duddies and self-important factotums in Whitehall. Here I feel I am in the thick of the action, and Park is a wonderful man. He is under such strain and yet he is always calm and collected when he makes his decisions, and he’s courteous and considerate to everyone around him. And there is no doubt that my own little contribution—giving him accurate, up-to-date information—is actually helping him. I’m useful! Mother would be shocked!

In addition, being in the thick of things, seeing the fate of England hanging in the balance, (sorry, that sounds a bit grandiose, but it’s true,) seems to have inspired my brain and lifted it up a higher level. The real Eleanor seems to be sitting back and letting some sort of superior Eleanor take over: my mathematical model might actually work! They have even given me another mathematician, an American, no less, to work with me.

Isaac Newton—no, I’m not comparing myself to Newton—once said he felt like a boy playing with pebbles on a beach, unmindful of the great ocean of truth that lay all undiscovered before him. If my model turns out to be even a just a tiny pebble I shall have exceeded my wildest expectations.

How strange to be so excited in the midst of such a dreadful war! How disconcerting to be scribbling out my formulas and equations and feeling important while the poor people of Cripplegate are searching the ruins of their homes for their missing children. I wonder if any of us will ever be normal again—whatever ‘normal’ means.

Thank you, thank you, for your letters, as always. Thank you, most of all, for being you.