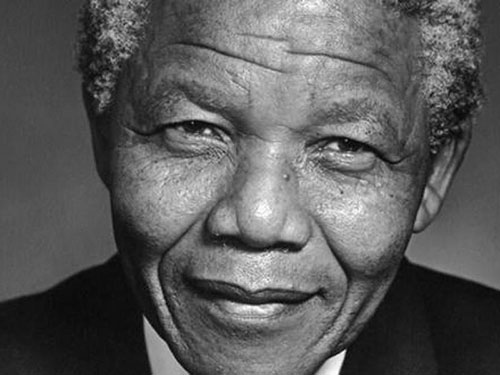 In April we focused on famous events that occurred during Mondays in April. By popular demand, we’ll do May as well. So, on this May 10th, a busy day in history: 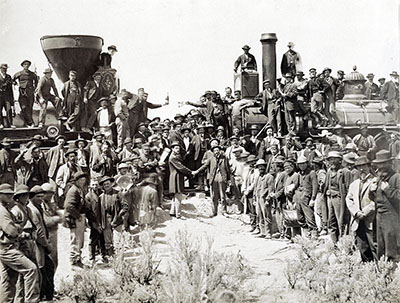 On May 10th, 1869, the Central Pacific Railroad’s eastbound tracks from California met the Union Pacific’s westward tracks at Promontory Point in Utah, linking the east and west coasts by a continuous uninterrupted railroad. The event could have taken place the previous day, but unpaid workers had chained the car bringing one of the presiders to the tracks some distance away, and wouldn’t let him proceed until they were paid. He coughed up their wages and the nation was united.

The journey from New York to San Francisco was cut from a very hazardous three months—either by cross-country wagon train or by ship around Cape Horn—to five days.

This event is one of the most important in the history of the country: it united the United States and created the possibility of an ‘American people’ and ‘an American economy.’ 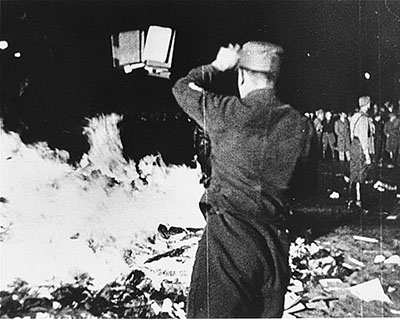 In 1933 the Nazi Propaganda Ministry, under the direction of Joseph Goebbels, orchestrated several campaigns to ‘cleanse’ German arts and sciences. One of these was a crusade led by the Deutsche Studentenschaft (German Student Union) to rid the country of books written by authors they considered undesirable.

The climax of the campaign came on May 10th, 1933, in the Square of the State Opera in Berlin, where 25,000 books were burned in a massive bonfire.

Among the authors ceremoniously immolated were Albert Einstein, Karl Marx, Franz Kafka and Sigmund Freud, all of whom were considered purveyors of undesirable thoughts. Children’s books written by Dr. Seuss were spared because they had not yet been written. 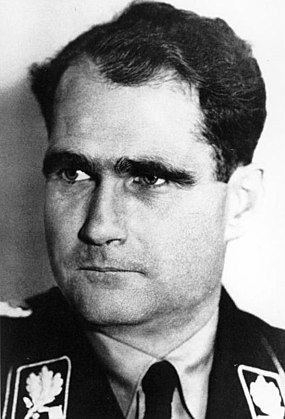 Rudolf Hess was Hitler’s deputy. On May 10th, 1941, he parachuted into Scotland and attempted to reach the Duke of Hamilton. He believed he could broker peace between Germany and Britain, in a grand bargain under which Hitler would control Europe and the British could keep their Empire. He was imprisoned in the Tower of London, a fate he shared with several kings, two of Henry VIII’s wives, and Queen Elizabeth I.

At the end of the war he was tried at Nuremberg and imprisoned at Spandau where he remained as the sole prisoner until his death (by suicide) in 1987, having been a prisoner for almost 50 years.

Rock Around The Clock 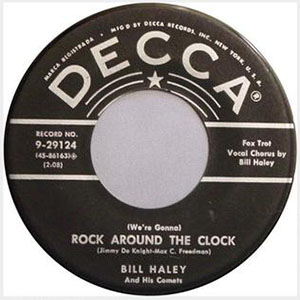 By tradition, Bill Haley’s record of Rock Around the Clock, released on May 10th, 1954, is taken to be the start of Rock and Roll, although it was not the first successful Rock song, being preceded by Big Joe Turner’s Shake, Rattle and Roll. 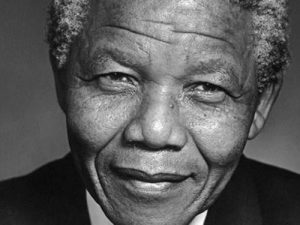 On May 10th, 1994, Nelson Mandela was sworn in as the President of South Africa, effectively ending almost 400 years of white rule. He had been awarded the Nobel Peace Prize in 1993.

Holland and then Britain ruled South Africa as a colony for over 300 years. The country gained independence in 1931 and was subsequently ruled by the white minority who imposed the principles and laws of apartheid.

Mandela spent a total of 27 years in prison for his opposition to white rule, during which he sustained himself with the inspirational poem Invictus, which ends with the words: ‘I am the master of my fate, I am the captain of my soul.’

As I said, a busy day in history.

← Yet Another Monday A Slender Thread →